Therefore, since we are surrounded by such a great cloud of witnesses, let us throw off everything that hinders and the sin that so easily entangles. And let us run with perseverance the race marked out for us, fixing our eyes on Jesus, the pioneer and perfecter of faith.

Did you know that when you make a commitment to work at a boarding school, you’re inherently saying yes to wearing many hats? You might be hired to teach science, but before the ink is dried on the contract, you’ll 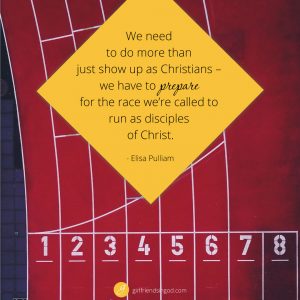 discover you’re also doing things like coaching the hurdlers on girl’s varsity track. Yes, it was quite a feat my husband took it on without a complaint, even though he never ran track a day in his life.

I’m pretty sure Stephen didn’t let on to his athletes that they knew more than he did. Instead, he focused on putting in time behind the scenes, studying the sport of hurdling using the stack books and videos he checked out of the library, since YouTube wasn’t yet a thing. One might say it was his stellar effort that led to a great season, but in reality, it was a partnership with the girls who were equally dedicated, teachable, and motivated.

They showed up prepared to run, with their track shoes on and minds in gear.

They showed up willing to learn, listening to critique on their technique so they could improve.

They showed up motivated to win, believing that was a goal worth pursuing.

Being “put on the team” didn’t make those girls’ track stars. Being given the responsibility to coach didn’t make my husband gifted for the task at hand. It was the time they put in each day that developed their ability and set the foundation for a fantastic season.

Witnessing their perseverance taught me so much about what my faith should look like, especially at a time when I wondered if I’d ever mature spiritually.

We need to do more than just show up as Christians – we have to prepare for the race we’re called to run as disciples of Christ.

Through faith in Jesus as our Lord and Savior, we get to “join a new team” as we find our place in the family of God. But that position also comes with the call to grow as a Christian.

Every single day, we have a choice to get into the race and run. We have to decide to throw off the sin that so easily entangles us, instead of sitting on the sidelines making excuses.

It’s up to us to fix your eyes on Jesus as we diligently focus on running to the finish line of our faith for God’s glory.

Dear Lord, I pray You will motivate me to run this race marked out for me with perseverance. May I throw off everything that hinders and the sin that so easily entangles. Help me fix my eyes on You, Jesus, focusing on the mission You have for me as I run to the finish line for Your glory. In Jesus’ Name,

What belief keeps you from running the race marked out for you? How can the example of an athlete training and a coach preparing translate to what God is calling you to in order to grow your faith deeper?

Elisa Pulliam is the founder of More to Be, a ministry devoted to helping women experience a fresh encounter with God and His Word. As a coach, speaker, writer, and creative strategist she counts it a privilege to help women live transformed, equipped, and intentional on impacting the next generation with Kingdom hope as they join in God’s work for their lives. Her latest book, Unblinded Faith: Gaining Spiritual Sight through Believing God’s Word, is described as “more than a devotional, it’s a tool for growing deep spiritual roots.” Connect with Elisa at MoretoBe.com

5 Responses to “Showing Up Ready”