Submit to one another out of reverence for Christ.

Hudson is only three years old, but he is already beginning to grasp the concept of accountability. Somewhere in his little heart, Hudson understands the truth that he needs someone to help him do the right thing. He knows he 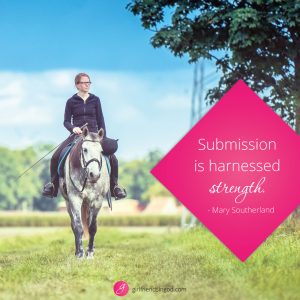 is weak. He wants to make the right choice, but sometimes he just can’t. And in those moments of weakness, he needs someone to take the decision out of his hands. Hudson has chosen his six-year-old brother Justus to be that someone in his life.

Justus and Hudson love the television show Paw Patrol which is a preschool action series about seven heroic puppies, Chase, Marshall, Rocky, Zuma, Rubble, Skye, and Everest, led by a tech-savvy boy named Ryder. The Paw Patrol works together on rescue missions to protect the city of Adventure Bay. The show models the importance of teamwork and friendship and teaches the importance of being a good citizen. It is also just plain fun to watch.

Soon after the Paw Patrol show began airing, the Paw Patrol stuffed animals began appearing on toy store shelves … and flying off of those shelves about as quickly as they appeared. Whenever I spotted one of the seven stuffed puppies, I snatched them up for Justus and Hudson. I really tried to wait until the next holiday or birthday to give each boy one of the puppies, but I just couldn’t help myself.

I can still hear Hudson’s scream of delight when he found Chase in his car seat. Justus put both hands in the air and shouted, “Yes!” and scrambled up on his bed to grab Marshall off of his pillow. We were celebrating the fact that it was Tuesday. Why not?

Both boys sleep with their Paw Patrol puppies, take them on trips, and include them in many of their daily adventures. I think it is safe to say the puppies are important to Justus and Hudson.

When Hudson got Rubble, he was just beyond delighted! He took that stuffed animal everywhere he went. Our daughter warned him that it was his responsibility to take care of Rubble and not lose him. And he was definitely not allowed to throw Rubble out of the car window.

Hudson does not have a great track record in this area. Hudson loves fresh air and begs his mom and dad to put the windows down “just a little bit” when they are driving. It often ends in disaster.

Hudson has thrown both his mom’s phone and his dad’s phone out of the car window, along with several Hot Wheel cars, a couple of action hero figures, one of his shoes … you get the picture.

Danna said they were running errands one day. The windows were down and the radio was blaring. Both boys were in their car seats holding a Paw Patrol puppy. She was watching them in the rearview mirror. Hudson seemed very thoughtful as he stared at Rubble. All of a sudden, he handed the precious puppy to Justus and said, “Here, Justus. You hold Rubble so I won’t throw him out of the window.”

Accountability is often seen as confining, a relationship straight jacket that limits freedom of expression and hinders those who “march to the beat of a different drummer.”

Actually, the opposite is true. Accountability frees us to grow and change and is an important part of every relationship.

Honestly, most of us have experienced very little accountability in life because at the heart of being accountable to someone is the willingness to be submissive to them. We have abused the concept of submission. Submission is protection and an intentional willingness to consider first the desires and wishes of someone before our own.

God places others in our lives to see things we cannot see, to encourage and build up, to correct, love and protect. We still tend to view accountability as a crutch and submission as a weakness.

Submission is harnessed strength, a controlled strength that is born out of obedience to God’s command.

Jesus submitted Himself to the will of His father. He willingly laid down His desires and dreams, His plans and hopes in total submission. Out of that total surrender came the most powerful life ever lived. When we willingly submit ourselves to God and choose to make ourselves accountable to others, we will experience a freedom and power we have never known before.

Father, I submit myself to You. Thank You for the protection, direction and power that come from that submission. Give me the wisdom to receive correction and to be accountable to others. Thank You for Your love that never condemns but always stands ready to keep me from making mistakes. And when I do fall, thank You for being there to pick me up and walk with me.

If you need help learning how to study and apply the Bible, check out my new Bible Study, How to Study the Bible. It is for both new believers and grounded Christians and offers many practical tools for uncovering the truths of God’s Word.