How to Successfully Walk the Tightrope of Life

“But the person who is joined to the Lord is one spirit with him (1 Corinthians 6:17 NLT).

“Blondin” was the stage name for Frenchman Jean-Francois Gravelet. He was a young man who migrated to 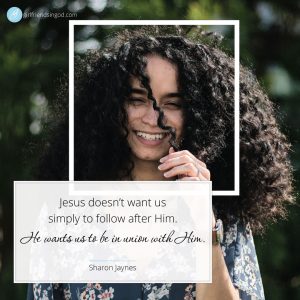 the United States with a troupe of acrobats employed by Master Showman P.T. Barnum. In 1858, the thirty-five-year-old Blondin visited Niagara Falls as a tourist and there conceived the preposterous idea of walking across it. In his mind’s eye, he saw himself walking between the two countries, the United States and Canada over the great gorge on nothing more than a rope pathway taut between the two.

Harry Colcord became Blondin’s agent and promoter, selling his product, “The Great Blondin!” On June 30, 1859, Blondin planned to make his first historic trek across the falls.

A 1,300-foot long, three-inch diameter manila rope stretched from one side of the gorge to the other. It sagged about twenty feet in the middle of the span and bounced about with the constant wind.

Hundreds of men and women gathered to watch this incredible act of bravery or madness, they didn’t know which. With mingled emotions of fear and faith, the crowd watched as the acrobat stepped out in silk tights and a smile. A quarter of the way out over the great expanse, Blondin stopped, laid down on the rope, then appeared to take a quick nap.

Then he bounced up handlessly and proceeded to walk the rope. At one point, he even did a backflip and landed soundly on the rope to continue his jaunt. When he arrived triumphant on the Canadian side twenty minutes later, applause from both banks momentarily drowned out the roar of the Falls.

Blondin accepted a glass of champagne, did a little dance on the rope, and walked back across to the American side in a mere eight minutes. Those watching noted that Blondin appeared to be one with the rope. If the rope bounced, he bounced. If the rope swayed, he swayed.

As time passed, Blondin made many more crossings over Niagara Falls. Each crossing promised more aggressive and daring stunts: walking backwards, walking on stilts, riding a bicycle, pushing a small stove in a wheelbarrow while cooking an omelet, and standing on his head in a chair. One day Blondin announced to his agent his intention to perform his most grand and daring stunt yet—taking a man across on his back.

Harry thought that was an ingenious idea, but no one volunteered, not even for a hefty sum. So Blondin had the idea that he would carry his agent, Harry!

Blondin took the terrified Harry by the hand and led him to the rope as 100,000 spectators looked on. Mechanically, Colcord mounted Blondin’s back, wrapped his arms around his neck, and placed his feet into harnessed stirrups on either side of Blondin’s hips.

As Blondin stepped out onto the rope, Colcord grasped him so tightly he could barely breathe. Harry later remembered the moment:

“Out over that horrible gulf I heard the roar of the water below and the hum which ran through the crowd…Blondin halted at the last resting point before the middle span and yelled above the roar of water and wind, “Harry, you are no longer Colcord; you are Blondin. Until I clear this place, be a part of me—mind, body, and soul. If I sway, sway with me. Do not attempt to do any balancing yourself. If you do we shall both go down to our death.’”[1]

The good news is that the two men made it to the other side.

Why did I tell you this story? Because we are in a similar situation as we walk the tightrope of life. Just as Blondin carried Harry, so Jesus carries us—from earth’s soil to heaven’s gate. When we try to balance on our own, we run the risk of tipping over into various Niagara Falls of circumstances. We struggle for balance when the real work is clinging to Jesus.

Jesus whispers, “Lean into me. Become one with me. Trust me to get you there.”

Paul wrote: “But the person who is joined to the Lord is one spirit with him,” (1 Corinthians 6:17 NLT). Jesus doesn’t want us simply to follow after Him. He wants us to be in union with Him as we live and move and have our being in Him (Acts 17:28).

Today, as Blondin carried Harry across the tightrope spanning the Niagara Falls, picture Jesus carrying you across the tightrope of life. Hear Him saying, “Until I clear this place, be a part of me—mind, body, and soul. If I sway, sway with me. Do not attempt to do any balancing yourself.”

Then when we get to the other side called heaven, we will hear the roar of applause!

God, I don’t know why I think I can do life on my own. Help me to remember to cling to Jesus and always move in union with Him. Show me what it means to abide in Him as I walk through each day.
In Jesus’ Name, Amen.

What do you think it means to be one with Jesus?  Read and highlight Acts 17:28 in your Bible.

Today’s devotion was adapted from Sharon’s book, A Sudden Glory: God’s Lavish Response to Your Ache for 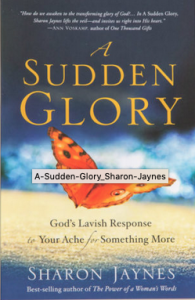 Something More. If you’d like to learn about how to live in sacred union with Jesus every day all day, then this book is for you!

[1] White Knuckles of Niagara by K.D. Tessendorf found at http://highlightskids.com/Stories/NonFiction/NF0998_niagaraKnuckles.asp

4 Responses to “How to Successfully Walk the Tightrope of Life”