“So do not throw away your confidence; it will be richly rewarded. You need to persevere so that when you have done the will of God, you will receive what he has promised” 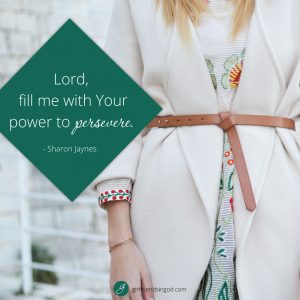 know what? I’ve missed many blessings because I got tired of the battle. I don’t want to do that any longer. I’m taking my cues from Joshua.

The battle plan to take the Promised Land was as simple as it was strange. March around the city of Jericho with all the armed men. Do this in silence, once a day for six days. Then on the seventh day, walk around seven times with the priests blowing the trumpets. Have the whole army give a loud shout; then the wall of the city will collapse and the army will go straight in.

Now, that was a strange plan. God’s infinite ways often don’t make sense in our finite minds. Sometimes you have to be willing to look ridiculous and be radical to live a remarkable life. The choices you make when you feel God’s nudge will become the hinges on which your destiny swings. Each individual decision you make, to obey or ignore God’s promptings and directives, is a thread that weaves the tapestry of your life.

This is where many give up—when they don’t see any progress. The son is still taking drugs. The daughter is still living with her boyfriend. The husband is still cold and aloof. The bank account is still hovering on in double digits.

“God, throw me a bone,” I cry. “Show me a little something! Let me see just a hint of progress! Can I see one brick fall?” And God says, “Keep walking … by faith.”

Just because you don’t see God working does not mean that He isn’t. Jesus said, “My Father is always at work” (John 5:17). The writer of Hebrews notes: “So do not throw away your confidence; it will be richly rewarded. You need to persevere so that when you have done the will of God, you will receive what he has promised” (Hebrews 10:35).

Today, you might be on lap number seven and not even know it. Joshua told them to march around Jericho, but he didn’t tell them how many times they were going to have to do it. He just said to “march forward” and “remain silent.”

Supposed they had stopped on day six saying, “This is ridiculous. I’m not feelin’ it. Not one stone has fallen to the ground. I don’t see any progress. Those folks are probably in there laughing their heads off. I’m going home.”

Can I tell you something? Sometimes I get tired of writing books, posting devotions, and crafting blogs. But as I sit down to the keyboard, I realize that something I say might be just what someone needs to take that last lap around her walled up promise. So I write. And then someone has the courage and sustenance to take one more lap.

Lord, sometimes I just get tired of trying. Tired of hanging on. Tired of believing for a miracle. Fill me with Your power to persevere. I’ll take the next step and believe for the next day. I will not give up!
In Jesus’ Name,
Amen.

I hope this gives you hope! Keep going! One. More. Day. One more lap. But who knows, it could be your last.

Today’s devotion was adapted from my book, Take Hold of the Faith You Long For: Let Go, Move Forward, Live Bold. Let’s take hold of all that Jesus has already taken hold of for us and placed in us! Click on the title and you will be able to download a free chapter and watch a video book trailer. The book also comes with a Bible study guide that is perfect for individual and group Bible studies. If you love coloring journal pages, you can find them free on my homepage.

30 Responses to “Don’t Stop Too Soon”