“Calling his disciples to him, Jesus said, ‘I tell you the truth, this poor widow has put more into the treasury than all the others. They all gave out of their wealth; but she, out of her poverty, put in everything—all she had to live on’” (Mark 12:43-44 NIV).

One summer my family and I traveled to Yellowstone Park and Jackson Hole, Wyoming. One of our goals was to see as many unusual 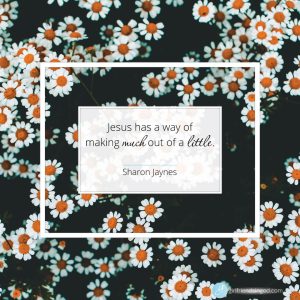 animals as possible. For us that was anything other than a dog, cat, or bird.

During the entire trip, we were on the lookout for moose, elk, buffalo, and other furry beasts with antlers. After several days we fell into the rhythm of looking for groupings of cars stopped alongside the road or crowds clustered in the woods. This signaled a sighting! As if holding up a neon sign, the assembly let us know we needed to stop. There was some magnificent creature we needed to see.

That’s what happened one day when Jesus was in the temple, but it wasn’t Himself He wanted people to see. It was a seemingly insignificant widow woman.

It happened during a Passover week when Jesus and His disciples went to Herod’s temple. The offering bins, or trumpets as they were called, were on the women’s level—the bottom level—number 1 of 5. That’s where Jesus went.

Mark tells us, “Jesus sat down opposite the place where the offerings were put and watched the crowd putting their money into the temple treasury (Mark 12:41).

There were 13 offering bins. Picture Jesus pulling up a chair by a certain offering box, knowing exactly which one the widow would come to.

One by one, wealthy attendees tossed their coins into the coffers, making as much noise as possible. But then, she came. A shabbily dressed, worn-down old woman. She timidly approached the offering box and gingerly placed her treasure among the coins. Two small copper coins—the smallest coins in circulation in Palestine—just a fraction of a penny. Two of these lepton, as they were called, were worth 1/64 of a denarius, a typical day’s wage. But in reality, her coins were worth more than any day’s wages. They were all she had—and Jesus knew it.

Do you ever feel that other people don’t really care about what is going on in your life? Do you feel insignificant in the grand scheme of things? I am sure this widow must have felt less than. I’m nothing. I have nothing. I am invisible to these men with flowing robes and tasseled garb.

Ever been there? I have. But she wasn’t insignificant or less than…not to Jesus.

“Calling his disciples to him, Jesus said, ‘Truly I tell you, this poor widow has put more into the treasury than all the others. They all gave out of their wealth; but she, out of her poverty, put in everything—all she had to live on’” (Mark 12:43-44).

The widow had two copper coins. I wonder what I would have done in the same situation. I think I would have been tempted to just give one to the temple treasury and keep one for myself.

But she gave all she had, fully trusting that God would take care of her every need. Commentators have pointed out that when Jesus said, “She out of her poverty put in all the livelihood that she had” (Luke 21:4), the word “livelihood” is the Greek word bios, which means she gave her life itself.

Imagine the picture: Jesus calls the disciples over to see the widow and her gift. Thirteen men gather round the offering box as Jesus shines the spotlight on this woman’s sacrificial act. Now, what else do you see? I see other people migrating to the scene like my family in Yellowstone.

“What’s so important?” “What’s going on?” “What are you men looking at?” Then Jesus lifts His hand and directs their attention to one of God’s magnificent creations. Ta-da!

She simply nods, smiles, and walks away. If they’d had a cell phone, I think they would have taken her picture!

Jesus has a way of making much out of a little. How precious that Jesus used the gift of a seemingly insignificant woman to teach the disciples a significant lesson. She became a “look and learn” example to this burly bunch of men—and to you and me.

While she might have felt worthless in the world’s eyes, she was priceless in God’s. And friend, so are you.

God, thank You for using seemingly insignificant people to do significant work. Thank You for shining the spotlight on women all through Jesus’ story. I pray You will show me ways that I can make a difference in someone’s life today.
In Jesus’ Name, Amen.

Who is one person that the world would consider insignificant who has made a significant difference in your life? 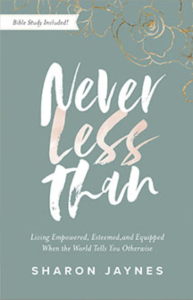 Sharon’s book, How Jesus Broke the Rules to Set You Free has been revised and updated! The new title is NEVER LESS THAN: Living Esteemed, Empowered, and Equipped When the World Tells You Otherwise. If you’ve ever felt less than because of your past, your present circumstances, or your gender as a woman then this book is for you! This is a message that your daughters and granddaughters need to hear.