Protect my life from the terror of the enemy.

Battles are everywhere… in our homes, in our hearts, in our humanity, and in realms unseen. The Bible actually has a lot to say about this: Our struggle isn’t just against flesh and blood, but against the rulers, against the 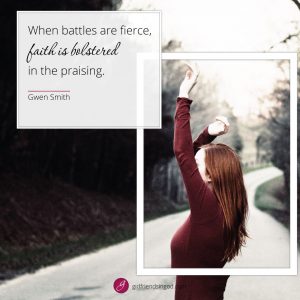 authorities, against the powers of this dark world and the spiritual forces of evil in the heavenly realms. (Ephesians 6:12) No weapons formed against us will prosper. (Isaiah 54:17) Greater is He who is in us than he that is in the world. (1 John 4:4) When we submit to God and resist the devil, he has to flee! (James 4:7) And there’s tons more.

Let’s be honest, that’s a lot to take in. It all sounds so major-motion-picture. So Star Wars! Good versus evil. Light versus Darkness. Luke Skywalker versus Darth Vader. Anakin versus himself.

On the big screen those who fight for good work tirelessly to fend off the attacks of the destructive and devious. They fly around in vehicles that range from sleek Delta-7 Jedi Star Fighters, to agile X-wing Fighters, nimble Speeder Bikes and the massive Millenni- um Falcon… all to take on their havoc-wreaking enemies who conspire and plan bad things on starships like the Death Star, Imperial Star Destroyer and the Star Cruiser. You get the picture.

On the screen of my heart, attacks feel more personal.

David felt this way too. In Psalm 64, he’s frustrated with his enemies and goes to battle by taking it up with God. Voicing his complaint about their destructive ways, he begs for good to overcome the evil conspiracy against him.

God, hear my voice when I am in anguish.
Protect my life from the terror of the enemy.
2 Hide me from the scheming of wicked people,
from the mob of evildoers,
3 who sharpen their tongues like swords
and aim bitter words like arrows,
4 shooting from concealed places at the blameless.
They shoot at him suddenly and are not afraid.
(Psalm 64:1-4)

David not only voices his complaints, but he voices his confidence that God will conquer his enemies. He’s confident that after God takes control, the people will fear and they will acknowledge who God is. Ultimately, the Bible assures us the righteous will rejoice because the enemy is defeated by the power of our God. #thisishuge

But God will shoot them with arrows;
suddenly, they will be wounded.
8 They will be made to stumble;
their own tongues work against them.
All who see them will shake their heads.
9 Then everyone will fear
and will tell about God’s work,
for they will understand what he has done.

10 The righteous one rejoices in the Lord
and takes refuge in him;
all those who are upright in heart
will offer praise.

We’re on His side.

So incredible! No wonder David has such a passion for Praise. When battles are fierce, faith is bolstered in the praising. Let’s let worship be our weapon of choice today.

Dear Lord, Please help me be an effective witness of Your power. Cover me in Your Spirit today and equip me to fend off attacks from the Enemy.
In Jesus’ Name,

What’s the balance between your complaints and your God-confidence?

If you want to read and study the Bible, but don’t know where to start, this is for you! Girlfriends in God

cofounder Gwen Smith has several online Bible Study options that will guide you on a personal journey with the Lord as you read, record, reflect on and respond to His Word. These studies will help you know what God says about tender topics like forgiveness, healing, fear, depression, relationships and hope. Each study can be done in the comfort of your home and in a timeframe that fits with your personal schedule. Visit GwenSmith.net/BibleStudy to learn more.

When Your Bucket is Empty by: Sharon Jaynes
A sign was posted on a telephone pole by the grocery store: “LOST DOG with three legs, blind in left eye, missing right ear, tail broken, and recently…
buff.ly/2Eline4 ...

Dear Lord, I’m feeling rather empty today. Rather than feeling sorry for myself, show me someone I can encourage. Give me the words to say and the courage to say them. I pray that as I give encouragement to others, that You, Lord, will fill me back up. In Jesus’ Name, Amen.
buff.ly/2Eline4 ...

Grammy-nominated singer/songwriter Jeremy Camp and his wife Adie join Girlfriends in God cofounder Gwen Smith on the Graceologie podcast to discuss how we can love and live with each other well. A powerful conversation to inspire your heart in this season of quarantine!

Father, I want to thank You for being my Shepherd

When Your Bucket is Empty