You are Worth More Than a Herd of Pigs

For God so loved the world that he gave his one and only Son, that whoever believes in him shall not perish but have eternal life.

An African tribe gathered round to listen to the story of Jesus healing a demon-possessed man recorded in Luke 8:26-33. The ministry, Faith Comes by Hearing, provided the tribe with an audio Bible and a digital 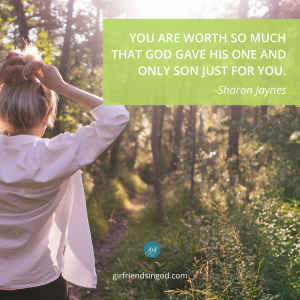 playback unit for them to hear the story in their own language.

Jesus and his disciples sailed to the region of the Gerasenes, which is across the lake from Galilee. When Jesus stepped ashore, he was met by a demon-possessed man from the town. For a long time this man had not worn clothes or lived in a house, but had lived in the tombs. When he saw Jesus, he cried out and fell at his feet, shouting at the top of his voice, “What do you want with me, Jesus, Son of the Most High God? I beg you, don’t torture me!” For Jesus had commanded the evil spirit to come out of the man. Many times it had seized him, and though he was chained hand and foot and kept under guard, he had broken his chains and had been driven by the demon into solitary places…

The tribal community was stunned when they heard this story. They knew the value of one pig, much less an entire herd. Why would Jesus do that? Why would He allow their entire income to be destroyed?

Many questions stirred among the listeners. Then the wise chief spoke. “Perhaps Jesus is showing us that one human soul is worth more than an entire tribe’s economy.”

I was silenced by his answer. That passage has been mysterious to me for many years, but God revealed the truth to an African chief hearing the story for the very first time. That chief understood just how valuable we are to God.

Do you realize how valuable you are to God? You are worth so much that He gave His one and only Son just for you.

Dear Lord, thank You for loving me. Whenever I feel like I’m not enough, remind me that I am worth so much to You, that You gave Your only Son for me. That’s really something.

Complete this sentence. To God, I am worth more than…

Look up the following verses. What do you learn about your worth?

Today’s devotion was taken from Sharon’s new release, Enough: Silencing the Lies that Steal Your Confidence.

Do the voices in your head tell you that you are not good enough, smart enough, pretty enough… or just not enough, period? It’s time to stop listening to the lies that sabotage your confidence and start embracing the truth of who God says you are and what you have in Christ.

Do I Really Need to Fail? By: MarySoutherland
I have never met a single person whose goal in life was to fail, but failure is a reality of life. The key to success is not avoiding failure; it is learning…
buff.ly/2Eline4 ...

Father, I know that I have failed You. Forgive me for the sin in my life. Thank You for Your love and mercy that covers that sin. Help me learn the lesson that each failure holds. Teach me to trust You with my whole life – failures and all. In Jesus’ Name, Amen.
buff.ly/2Eline4 ...

Three Steps to Becoming a Finisher by: Kathi Lipp
I, by my nature, am an un-finisher. I love to start. Especially books, crafts, home DIY ideas… Really, anything that could be…
buff.ly/2Eline4 ...

Father, I know that I have failed You. Forgive me

Father, You know me, and you know my nature. Help

Father, I want to thank You for being my Shepherd

Do I Really Need to Fail?

Three Steps to Becoming a Finisher

When Your Bucket is Empty