See what great love the Father has lavished on us, that we should be called children of God!

I became a Christian when I was a teenager. But even after I made a commitment to follow Christ, feelings of 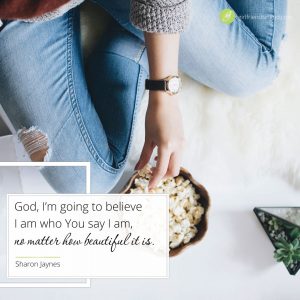 inferiority, insecurity, and inadequacy clung to me like a spider’s sticky web. The dirge of “I’m not good enough” was a song I couldn’t get out of my head. The lies of the enemy created limitations in my life. They were the barbed wire that fenced me in and kept God’s best at bay.

Heavenly Father, thank You for choosing me to be your child. Today, I am choosing to believe that I am who You say that I am—a holy, dearly loved, child of Yours who is equipped by You, empowered by the Holy Spirit, and enveloped in Jesus Christ.

FREE, did somebody say FREE? Visit my website July 1-15 to receive up to 5 free Gifts with purchase. 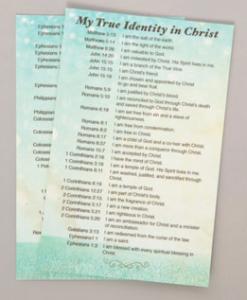 One of my greatest passions is to help women live fully and free in Christ. It drives my writing, my speaking, my ministry. One thing that helped me begin the journey of living fully and free was discovering the truth of my identity in Christ. Over at www.sharonjaynes.com, I have a laminated card filled with verses to help you take hold of the truth of who you really are. This, my friend, is who God says you are—completely forgiven, dearly loved, and free of condemnation. While you’re there, check out my book, Lovestruck: Discovering God’s Design for Romance, Marriage, and Sexual Intimacy from the Song of Solomon.

19 Responses to “You Are Who God Says You Are”