Whose Voice Will You Listen To Today?

“But the Advocate, the Holy Spirit, whom the Father will send in my name, will teach you all things and will remind you of everything I have said to you” 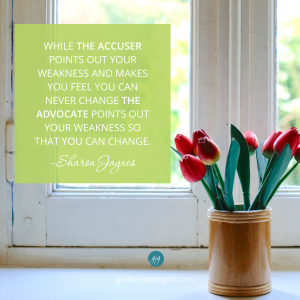 “Steve, who are those men with the video cameras and why are they recording the game?” I asked my husband.

“The guy in the opposing stand is from the team that we’ll be playing next week,” he explained. “He is recording the game to study our weaknesses, so our opponents will know where to attack and defeat us. The man on our side is recording the game also looking for weakness, but for a different reason. He will show our team their weaknesses so they can learn from them and improve . . . to make them better. Same video. Different purposes.”

Ah, a sudden glory moment. I don’t know much about sports, but I do know a bit about how the enemy works. He records the video of our lives and looks for our weakness to bring us down—to plan his attack, to defeat us.

The Bible has many names for that enemy: Satan, the great serpent, the deceiver, and the devil. But the most telling name is found in Revelation 12:10: the accuser who accuses believers before God day and night.

Some say that the devil’s main role is tempting mankind to sin. But I believe what trumps even temptation is his role as the accuser who shackles us with shame and condemnation once we succumb to the temptation. He paces before God saying, “She did this and she did that.” He plays and replays the video in the theater of your mind, pointing out all your faults and weaknesses to bring you down. He is AGAINST you.

But remember, there were two men creating a video of Steven’s game. Just as the accuser is against you, there is someone else who is for you. Before Jesus went to the cross, He assured His followers that He would not leave them as orphans. He promised to send the Spirit who would encourage, enlighten, empower, and intercede for all believers. And then Jesus gave the Spirit a name: the Advocate. “But the Advocate, the Holy Spirit, whom the Father will send in my name, will teach you all things and will remind you of everything I have said to you” (John 14:26).

An advocate is someone who is for you and acts on your behalf. Yes! He is for you! And one of the ways that He is for you is to convict you of sin—of something that you have done that is contrary to the ways of God. God will never reveal a weakness, a sin, or a flaw in your life just for the sake of exposing it. He always reveals a deficit because it’s time to make it right—to conform you to the image of His Son. The Holy Spirit awakens your senses to an area of your life that you need to change, and then helps you do it. He shows you the video and says, “Right there. See that move. Let’s work on that area and improve your game.”

Remember this, the voice you listen to will determine your destiny. Let’s determine together to listen to the voice that loves us most.

Dear LORD, help me distinguish between the accuser’s voice and the Advocate’s voice. I know I have a choice when it comes to whom I listen to: condemnation or correction. Thank You for Your great love that never condemns, but lovingly corrects.

Today’s devotion was taken from my book, Take Hold of the Faith You Long For: Let Go, Move Forward, Live Bold. And if there is anything we need to let go of in order to move forward it’s shame and condemnation. Check out this book to learn how to let go of everything that holds you back from experiencing all that God has for you, move forward in fierce faith, and live bold by taking hold of everything Jesus has already placed in you! Click on the book cover to download a sample chapter and view a quick video. And if you’re looking for a new study for your women’s group or individual study, Take Hold includes a Bible Study guide in the back.

5 Responses to “Whose Voice Will You Listen To Today?”