It was the hardest day of my life. One phone call, and my life crumbled into a pile of dust easily blown away by shock 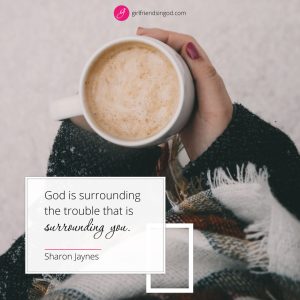 and unbelief. In a moment, my trust in God was tested as never before. Could I trust Him with this?

Trusting God would certainly be easier if we could see Him and His angel armies face-to-face. But even though we can’t see them in the physical realm, we can trust that they are in the spiritual realm—a realm that is more powerful than anything we could ever imagine. Even when we don’t see God working, we can be sure that He is.

God shows us a powerful glimpse into that spiritual realm in 2 Kings 6:8-18. At this time, the prophet Elijah was really getting on the king of Aram’s nerves. Ancient Aram (now Syria) was fighting against the Israelites, and Elisha was able to predict where and when the Arameans were going to attack. He warned the Israelite army so that they were on guard and ready when the enemy attacked. The Aramean king was furious! Here’s what the Bible tells us.

This enraged the king of Aram. He summoned his officers and demanded of them, “Tell me! Which of us is on the side of the king of Israel?”

“None of us, my lord the king,” said one of his officers, “but Elisha, the prophet who is in Israel, tells the king of Israel the very words you speak in your bedroom.” (My favorite verse of the story!)

“Go, find out where he is,” the king ordered, “so I can send men and capture him.” The report came back: “He is in Dothan.”

Then he sent horses and chariots and a strong force there. They went by night and surrounded the city.

When the servant of the man of God got up and went out early the next morning, an army with horses and chariots had surrounded the city. “Oh no, my lord! What shall we do?” the servant asked.

I’ve felt like this before. Haven’t you? Difficult circumstances press in from every side. My story looms large while I shrink small. “This is too much for me!” I cry. I can’t do this anymore. I don’t even want to go out of my house. I can’t face another day! Where are You God? You promised You would never leave me or forsake me, but I don’t sense Your presence. And if You are here, why aren’t You doing anything? I want out of this story!

Honest. Raw. Somewhat embarrassing to admit. We wake up in the mornings and sense the enemies all around—surrounded by problems that we cannot solve and people we cannot control.

Elijah’s servant felt the same way. His faith was as flimsy as the tent flaps he was standing behind. Elijah’s was as strong as the tent peg anchoring the canvas in place.

And Elisha prayed, “Open his eyes, Lord, so that he may see.” Then the Lord opened the servant’s eyes, and he looked and saw the hills full of horses and chariots of fire all around Elisha. (2 Kings 6:11-16 NIV)

Notice that the passage doesn’t say that Elisha prayed that God would send an army. The warring angels on chariots of fire were already there. He simply prayed that the servant would be allowed to see them.

Friend, God is surrounding whatever difficult situation is surrounding you. Jesus painted this same picture in John 14:20 when he said, “I am in my Father, and you are in me, and I am in you.”

Most likely God won’t pull back the curtain separating the physical realm from the spiritual realm for us to see, but we can be assured that we are surrounded by a heavenly host ready to protect us in our deepest struggles.

What is one situation in your life right now that you are having trouble trusting God?
What is God speaking to your heart about His awareness of your situation and His protection in your circumstances?

Do you want the kind of faith that ushers in total trust? That knows God is always working? That tells the devil, “be gone!” The kind of mountain moving, giant slaying faith that keeps your feet on solid ground no matter how shaky? If so, then Sharon’s book, Take Hold of the Faith You Long For: Let go, Move forward, Live bold is just for you. It also includes a study guide.