When am I finally going to get what I deserve? 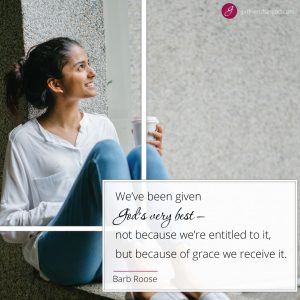 Maybe you’ve muttered those words under your breath while reading an email from your boss. Perhaps you’ve spat those words out in anger after a visit with your parents or your kids. You feel like you’ve bent over backward, but you still don’t feel appreciated, even though you put in the time, effort, or energy to earn it.

One summer, my youngest daughter worked on the restaurant staff at a dream destination theme park. She called home to express frustration with customers who yelled and even bullied restaurant employees when a ketchup container was empty, or an ordered sandwich was missing bacon. She remarked that customers justified their rude behavior with the common explanation, “I paid a lot of money to come here.” In their minds, paying for a high-priced vacation meant that they could behave rudely or unkindly if their experience was less than perfect. This is an example of entitled thinking.

No one wants to admit to feeling entitled, but as Christians, it’s a sneaky attitude that can creep into the most mature Christian’s life without notice. Spiritual entitlement harbors secret beliefs like, “If I am a good person, then I shouldn’t have to suffer” or, “If I pray enough, then God should give me what I want.”

However, spiritual entitlement is the stairway to resentment toward God. We can get grumpy with God because He hasn’t or doesn’t give us what we think that we deserve. If you’re feeling angry with God or resentful toward God, it’s okay, He can take it.

However, your task is to tackle any entitled mindset that is stinking up your thinking. Letting go of an entitled mindset frees you to remember the power of God’s grace over what you think that you should get. It’s basking in God’s grace, remembering the freedom you enjoy rather than the consequences of your sin.

In Luke 15, Jesus taught a group of religious leaders about entitlement mentality in a way that they never saw coming. As Jesus told the story of the prodigal son coming home, the religious leaders squirmed at the idea of grace. Why would the young man be restored to his rightful place after such bad behavior?

Then, Jesus introduced the dutiful older brother who followed all of the rules. The older brother was angry with his father and refused to come to the welcome home party. “Look! All these years I’ve been slaving for you and never disobeyed your orders.” (Luke 15:29). Then he railed against his father for never giving him what he thought he deserved.

The tragedy of an entitled attitude is that it erases grace and ignores the abundance of mercy. The older brother, who symbolized the self-righteous religious leaders, clung to his entitled behavior. That attitude robbed him of celebrating grace in his brother’s life and perhaps recognizing it in his own.

I wonder, where does that elder-brother attitude show up in our lives? When I was growing up as the oldest child, sometimes I had to take on more responsibilities than my siblings. I’d stomp my foot and say, “Dad, that’s not fair!” He would reply, “That’s because life’s not fair.”

As a woman who has made her share of mistakes, I’m so glad that I haven’t gotten what I deserved! I’ve been the recipient of God’s grace and mercy so many times in my life, and I haven’t deserved any of it. But I’ll take it!

We don’t know if the elder brother ever changed his mind, but Jesus tells us that the father never did. In Luke 15:31, the father told the elder son that everything that he had belonged to his son. The same goes for you and me. As God’s children through Jesus Christ, we’ve been given God’s very best—not because we’re entitled to it, but because of grace.

God, I give thanks for Your grace and mercy in my life. Thank You for all of the blessings that I do not deserve. Thank You that I don’t have to earn Your love or forgiveness. For the places where life doesn’t seem fair, I choose to focus on what I do have rather than what I don’t.
In Jesus’s Name, Amen.

How have you seen God’s grace and mercy bless your life even though you don’t deserve it?
Where are you struggling with the unfairness of life lately? 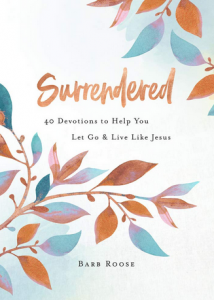 Today’s content is from Barb’s recent devotional book, Surrendered: 40 Days to Help You Let Go and Live Like Jesus. This 40-day devotional invites you to let go of trying to control others or outcomes and learn how to live like Jesus. Learn how to trust God’s power, presence, promises, and provision for your life so that you experience God’s peace no matter what’s happening in your life.

2021 by Barb Roose. All rights reserved.