If your right eye causes you to sin, tear it out and throw it away.

How’s that for an encouraging verse! Jesus said it, so let’s talk about it a minute. 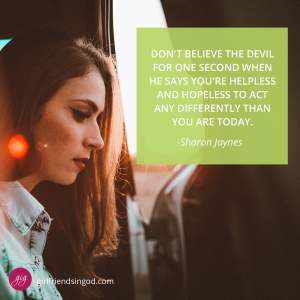 sermon. It was a “visitors, close your ears” moment as Jimmy interrupted the service for an important message from our neighbors.

See, right beside our church property is a city park. On Sundays, when our parking lot is full, we tend to use the city parking lot for our overflow parking. The only problem is the folks going to the city park don’t like it that those daggum church people are taking their parking spaces.

And while our sweet pastor calmly asked the congregation, once again, to stop parking in the city parking lot (he didn’t yell, but I bet he wanted to), folks still do it.

As soon as Jimmy finished his announcement and began his sermon, God had a sermon just for me. He wasn’t finished with me and the forbidden parking lot issue. That’s what happens when you make a path or keep a path open, He seemed to say. You’re going to walk down it eventually.

See, although we’ve been warned, scolded, and pleaded with not to park next door, a little path is situated through the bushes, from the city park’s parking lot to our church’s parking lot. The bushes are trimmed on both sides, cobblestones are carefully placed, and a nice little bit of concrete forms a gently curving sidewalk. Someone keeps the bushes clipped and the grass maintained. The breezeway almost beckons us (me) to break the rules.

Now let’s go down a different path. Let’s call the path sin, or maybe it’s just a bad habit you say you can’t help indulging in. Let’s say you’ve decided that once and for all you are not going to park yourself in the parking lot of that behavior.

You’re not going to stop by Dunkin’ Donuts and eat a half dozen chocolate-covered donuts in one sitting.

You are not going to sleep with that boyfriend—ever again!

You’re not going to date that guy you know is bad for you—ever again.

You’re not going to flirt with the married guy in the next cubicle.

You’re not going to gossip about other people.

You’re not going to drink alcohol because you know you have a problem.

The guy’s number is still in your contacts list on your smartphone.

You still think about what that guy in the next cubicle would like when you get dressed for work in the morning.

You still pull up that website when you hope God isn’t looking.

You still pull up a chair when someone begins to gossip.

You still take the route home from work that goes right by Dunkin’ Donuts.

You keep a bottle in the cabinet…just for company.

The path beckons you. And as long as you keep the breezeway open, you’ll probably breeze right through it…eventually. The answer? Remove the path. Put up a fence with no gate.

Get rid of your computer.

Make the path impassable, implausible, and impossible to take, and put up a gateless fence instead. Jesus said, if your eye causes you to sin, pluck it out (Matthew 5:29). That’s pretty dramatic. I’m not telling you to pluck out your eye, and Jesus wasn’t saying that either, not literally. But He was telling us to remove the cause of the temptation. Remove the path. Put up a fence.

Do you need to put up a fence where you now have a path? I erected a fence the moment I pressed the send button when I told this story about the pastor’s sermon in a blog post. As soon as I had told someone about my parking dilemma, I never parked in the city parking lot again. Just telling someone about the struggle often helps with accountability. And you don’t have to do it alone. You have the power of the Holy Spirit working in you and through you. Don’t believe the devil for one second when he says you’re helpless and hopeless to act any differently than you are today.

Lord, I’ll admit, I have a few paths that need to be shut down. Help me to have healthy boundaries and strong fences that keep me away from tempting situations. Help me to make new paths that lead to holy living.

Ponder the following verses and turn them into prayers.

You make known to me the path of life; in your presence there is fullness of joy; at your right hand are pleasures forevermore. Psalm 16:11 ESV

Make me to know your ways, O Lord; teach me your paths. Psalm 25:4 ESV

In all your ways acknowledge him, and he will make straight your paths. Proverbs 3:6 ESV

Enough: Silencing the Lies that Steal Your Confidence exposes the lies that keep you bogged down in guilt, shame, and insecurity. By recognizing the lies, rejecting the lies, and replacing the lies with truth, you’ll be able to:

Also, for a daily reminder that you are enough, see Sharon’s Enough bracelet crafted by the women of Fashion and Compassion.