“So do not throw away your confidence; it will be richly rewarded. You need to persevere so that when you have done the will of God, you will receive what he has promised.”

Can I make a confession? Sometimes I quit too soon. I’ve quit when what I really needed to do was to press on 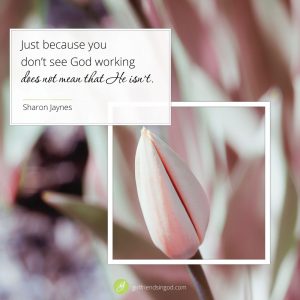 and press through. Sometimes I’ve gotten tired of the struggle—tired of trying. And you know what? I’ve missed many blessings because I threw up my hands in the battle and said, “Just forget it.” I don’t want to do that any longer. I don’t want to stop too soon.

The battle plan to take the Promised Land was as simple as it was strange.

Then the Lord said to Joshua, “See, I have delivered Jericho into your hands, along with its king and its fighting men. March around the city once with all the armed men. Do this for six days. Have seven priests carry trumpets of rams’ horns in front of the ark. On the seventh day, march around the city seven times, with the priests blowing the trumpets. When you hear them sound a long blast on the trumpets, have the whole army give a loud shout; then the wall of the city will collapse and the army will go up, everyone straight in.” (Joshua 1:2-5)

Now, that was a strange plan. God’s infinite ways often don’t make sense in our finite minds. Sometimes you have to be willing to look ridiculous and be radical to live a remarkable life. The choices you make when you feel God’s nudge will become the hinges on which your destiny swings.

Jericho was “tightly shut up” (Joshua 6:1 NLT). Sometimes it can feel that our promises are “tightly shut up.” That doesn’t mean that we give up. That means that we suit up, step up, and keep moving forward.

This is where many give up—when they don’t see any progress. “God, throw me a bone,” I cry. “Show me a little something! Let me see just a hint of progress! Can I see one brick fall?” And God says, “Keep walking…by faith.”

Just because you don’t see God working does not mean that He isn’t. Jesus said, “My Father is always at work” (John 5:17). The writer of Hebrews notes: “So do not throw away your confidence; it will be richly rewarded. You need to persevere so that when you have done the will of God, you will receive what he has promised” (Hebrews 10:35-36).

Today, you might be on lap number seven and not even know it. Supposed they had stopped on day six saying, “This is ridiculous. I’m not feelin’ it. Not one stone has fallen to the ground. I don’t see any progress. Those folks are probably in there laughing their heads off. I’m going home.”

Lord, sometimes I just want to give up. As a matter-of-fact, I am tempted to give up on something pretty important right now. Fill me with the power of the Holy Spirit on the inside, so that I can persevere on the outside.

Ponder this verse: “Let us not become weary in doing good, for at the proper time we will reap a harvest if we do not give up” (Galatians 6:9 NIV). What does it mean to you?

What is one situation in your life where you perhaps gave up too soon?

What is one situation in your life right now that God is calling you to press on?

Get a sticky note and write the following: I will not give up on _____________. Fill in the blank and keep it somewhere where you will see it often.

More From the Girlfriends:

Today’s devotion was adapted form Sharon’s book, Take Hold of the Faith You Long For: Let Go, Move Forward, Live Bold. Join Sharon as she shows you how to take hold of all that Jesus has done for you and placed in you. Don’t settle for a mediocre faith that’s less than what God intends. Grab hold of that mountain-moving faith you’ve always longed for! This book also includes a Bible study guide.