The Tomb Was Empty

He is not here; He has risen!

The boys and girls in Mrs. Stephens’ fourth grade Sunday school class entered the room and quickly found their seats. The girls were dressed in frills and lace and chatting excitedly about the candy-filled baskets they had 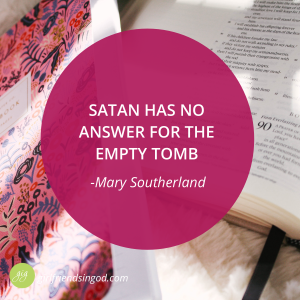 received that morning. The boys pulled at the unfamiliar ties around their necks and quickly discarded the sports coats they had obviously been forced to wear. The room was filled with excitement – for good reason. It was Easter Sunday.

Mrs. Stephens wanted to help her students understand that there is so much more to the Easter holiday than new clothes, chocolate bunnies, and egg hunts. Easter is more than family gatherings and tables filled with luscious food. Easter is about life. Easter celebrates the certainty of Jesus’ death on the cross, the fact that He was buried, and that He came out of a burial tomb to conquer death so that we can live now and eternally.

Mrs. Stephens came up with a plan. After sharing the Bible story of Jesus’ resurrection, she gave each one of her students an empty plastic egg and said, “We are going to take a walk outside, and I want each one of you to find one sign of life and put it in your plastic egg.”

As the children filed out of the room, Mrs. Stephens noticed Danny, a little boy with Down syndrome who had been coming to her class for some time. His bright smile and sunny disposition had immediately won her heart. In fact, when it came to Danny, she often thought he had taught her so much more about the unconditional love of God and the joy of simply being a child of God than she could ever teach him. When she heard the other children make fun of him, it broke her heart. She always corrected the children and tried to help them see just how special Danny was, but Danny seemed oblivious to their hurtful words, and thought of each child as his “buddy.”

The children soon returned from their walk, depositing their eggs on the teacher’s desk as they made their way to their seats. Inside one student’s egg was a lady bug. In another was an ant. Others had collected flowers, twigs, blades of grass and leaves to fill their eggs. But one egg had nothing in it. Everyone knew whose egg it was. Mrs. Stephens silenced the giggles with a look of warning. When she asked Danny why he had not put anything inside his egg to show signs of life, his face broke into a huge grin as he responded, “Because the tomb was empty.”

Danny got it. He truly understood the profound truth of Easter. The empty tomb is the ultimate sign of life and a miracle like none other.

Jesus Christ had risen from the dead. The women knew Jesus was dead. Some of them had seen Him die. And they were sure His body was in the tomb; it had been there since Friday. But when they went to anoint the body on that Sunday morning, the tomb was empty! The body could not have been stolen. Nobody was playing tricks on them. They were not merely fooling themselves. The miracle was real. They could see the empty tomb with their own eyes. Jesus Christ really had risen from the dead!

I would love to have been there that morning when the women went to the tomb – expecting to deal with death and instead found life, wouldn’t you? You may be dealing with death in your own life – the loss of a loved one – the death of a dream – the pain of a broken body. Just as Jesus Christ rose from the dead, He can breathe new life into your heart and mind. Right now, quietly turn to Jesus. He is waiting for you – healing and restoration and new life are in His hands.

Consider this truth: Satan has no answer for the empty tomb. What does the resurrection of Jesus Christ really mean to you?

Set aside time today to remember what Christ has done for you through His death on the cross and His resurrection from the dead. Read Luke 24 and celebrate the life only He can give.

Set aside time today to remember what Christ has done for you through His death on the cross and His resurrection from the dead. Read Luke 24 and celebrate the life only He can give. You can make Mary’s MP3, Celebrate Life, part of your Easter celebration as she delivers this powerful message that not only offers hope, but explains how you can learn to truly live and celebrate life.

Be sure to check out the FREE MP3s on Mary’s website and connect with Mary through email or on Facebook.

3 Responses to “The Tomb Was Empty”