The Gift of Forgiveness

He (God) is so rich in kindness that he purchased our freedom through the blood of His Son, and our sins are forgiven.

The holidays have a way of resurrecting old hurts. One of the greatest gifts we can give ourselves is the choice to forgive those who have hurt us. 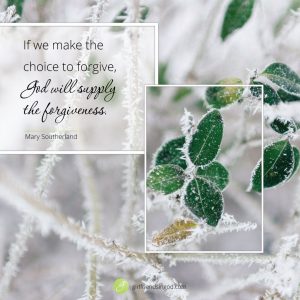 Forgiveness is not easy – but it is necessary if we want to experience peace and joy.

Part of forgiveness is releasing the person from the debt we think they owe us. Refusing to do so extinguishes our joy.

Sometimes we just need to let go and cut our losses instead of allowing the weight of an unpaid debt deplete our mental and emotional energy. In other words, we can forgive the debt and set ourselves free.

Years ago, Dan and I decided it was time to sell one of our old junky cars. We had several from which to choose, but one was junkier than the rest. A man who worked for the church said he could fix up the car and decided to buy it.

The man agreed to make monthly payments for one year. No papers were signed because it was a business agreement between two ministers. I know. Some lessons are learned the hard way.

Dan gave the man the car title and car keys. The man gave us nothing. Not one penny.

Dan talked with him several times. “I will make a payment soon,” the man promised. “Soon” never came.

I was furious – not so much because of the money, although it would have come in very handy, but because this man was taking advantage of my husband’s giving heart … and ticking me off in the process. I ranted and fumed for several days until Dan said, “Honey, I have decided to forgive the debt on that old car.” Well, I decided not to, and my anger grew.

A few weeks later, the man quit his job at the church and went to work for a nearby grocery store – my grocery store. Almost every time I went to the store, the man was there. And every time I saw him, my anger grew. I finally realized that this whole car situation was robbing my life of joy.

I decided to give him the car. It was the only thing I could do if I wanted peace.

I created a mental scene in which I drove to the grocery store, handed the car keys to the man, and said, “Merry Christmas!”

The plan worked. I forgave the debt and let it go. The most amazing thing happened. I was the one set free. Not one thing about my circumstances had changed. But my heart had.

From that day on, every time I saw the man, I waved and smiled. He began avoiding me, unable to look me in the eyes. God really does have a sense of humor. A few weeks later, I saw the man driving a different car and learned from one of his co-workers that “his old car just up and died.” Enough said.

Forgiveness is a deliberate choice – not an emotion or a feeling. Feelings may or may not follow that choice, but God’s favor certainly will. Honestly, when it comes to forgiveness, feelings are irrelevant, but obedience is crucial. Do not base the validity of what you are doing on how you feel.

If we make the choice to forgive, God will supply the forgiveness.

Forgiveness is our greatest need and God’s greatest gift.

Father, I praise You for the love and forgiveness You so freely offer. I don’t understand how You can love me when I am so unworthy of the sacrifice Jesus made on the cross. To think that He died for me rocks my world. Please give me the wisdom and strength to forgive those who have hurt me. I want my life to be a living illustration of Your unconditional love and unending forgiveness.

One of the most powerful illustrations of God’s love and forgiveness is found in the lives of Hosea and Gomer. Hear their story in my MP3 download … Love That Never Fails.

4 Responses to “The Gift of Forgiveness”