The Danger of Going with the Flow

“Don't copy the behavior and customs of this world, but let God transform you into a new person by changing the way you think. Then you will learn to know God's will for you, which is good and pleasing and perfect" (Romans 12:2 NLT).

I met my husband at a Bible Study in college and quickly learned that he was a very frugal, industrious, and 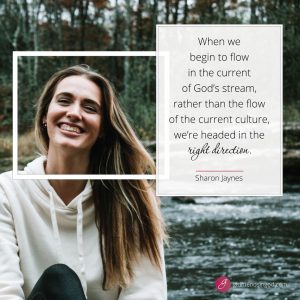 resourceful young man. On our first date, he came to pick me up in his ten-year-old Volkswagen Beetle that he had purchased for $725. He says it was yellow. I say it was beige. Regardless of the color, this fine piece of machinery had several not-so-fine features.

It had no air conditioner, no defroster, and…wait for it…no speedometer. The speedometer broke when the odometer hit 200,000 miles and never left 0 again. So how did he know how fast he was driving? He paced himself according to the speed of the cars around him, and he knew when to change gears by judging how much the car shook. I kid you not.

So Steve traveled around town and on highways, with no earthly idea of his exact speed. He was totally dependent on those around him to guide him. Most of the time that worked. One time it didn’t.

It was about 98 degrees the day Steve drove from his hometown to mine for our wedding weekend. Because his car had no air-conditioning, he left home very early in the morning. However, because he left very early there were few cars on the road. His points of reference were missing, and he couldn’t judge his speed.

About two hours into the trip, Steve saw a blue light flashing in his rear-view mirror and his heart sank. With speeding ticket in hand, he slowly puttered for the rest of the journey for us to say our “I do’s.”

It would have been so easy to be angry at that patrolman for giving Steve a ticket on his way to get married. But the truth is, cars aren’t meant to be driven without speedometers…and neither are we.  If we pace ourselves according to the speed of those around us, we will get in trouble.

Paul reminds us, “Do not conform to the pattern of this world, but be transformed by the renewing of your mind. Then you will be able to test and approve what God’s will is—his good, pleasing and perfect will (Romans 12:2 NIV).

I love how the New Living Translation says it, “Don’t copy the behavior and customs of this world, but let God transform you into a new person by changing the way you think. Then you will learn to know God’s will for you, which is good and pleasing and perfect.”

The Greek word for “conform” is syschematizo and means to be molded according to a pattern or assuming a similar outward form by following the same pattern. It’s easy to just fall into the world’s way of acting and thinking. Going along with the flow has always been easier than going against it.

There are a lot of behaviors and customs that the world says are acceptable but the Word says are not. Our culture celebrates sin and condemns constraint. And it would be so easy to drive along without a gauge of any sort, but pace ourselves according to the flow of those around us.

But there is a better way! It comes after the “but.” “But let God transform you into a new person by changing the way you think.” And that transformation happens when we get God’s Word in our hearts and minds.

Transformation begins when we accept Jesus as Savior and our dead spirits come to life (Ephesians 2:5), and continues as we align our thoughts, beliefs, and actions with God’s Word. When we begin to flow in the current of God’s stream, rather than the flow of the current culture we’re headed in the right direction. And without knowing God’s Word, we won’t even be able to know the difference.

And look at the benefit of knowing God’s Word: “Then you will learn to know God’s will for you!

Steve and I kept that Volkswagen Beetle for three more years. We puttered around town to our first jobs, shivered through two winters, and never got another ticket.

Father, I want to make sure that my thinking aligns with Your Word. As I read my Bible, help the words sink into my heart and flow out with my actions.
In Jesus’ Name, Amen.

Can you think of 1-5 ways that you have gone with the flow of the world that you might need to rethink?

Today’s devotion was taken from a bad day that had a good lesson. But what if you feel like you’ve had bad chapters in your life that are a lot worse than a speeding ticket. Rest assured; God can use those, too. When You Don’t Like Your Story will show you how to transform your worst chapters into your greatest victories that God can use. Do you like FREE? Click here to download a passel of FREE resources.

2 Responses to “The Danger of Going with the Flow”