Before I made you in your mother's womb, I chose you.

We all long to be chosen, loved by someone who sees us as we really are and recognizes our worth. Right? 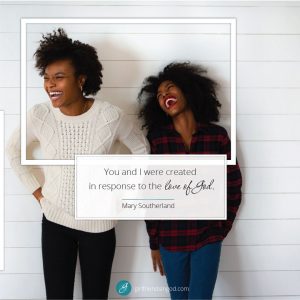 Jeremiah’s words are a breathtaking truth for every believer:

God chose us first … and then created us in response to that choice! How awesome is that? The plan for our life came first!

Esther was chosen by God but felt unworthy of that choice. Esther was an orphan, an insignificant and unknown Jewish girl living with her uncle, Mordecai, when she was chosen to be Queen, the wife of Persian King Ahasueras. Esther reigned for only a short time when Mordecai learned of a plot to assassinate the King. Mordecai told Esther who told Ahasueras. The guilty men were executed, and the king’s life was spared, but life for the Jewish people became extremely difficult.

Haman, a very influential but evil officer in the king’s court, was promoted to the second highest position in the land. Haman hated the Jews and convinced the King to issue a law that all people had to bow to the King, or they would be executed. That law would mean certain death for not only Esther and Mordecai, but for every Jew who bowed only to God.

And there was one other small problem.

The King did not know that his new queen was a Jew. As Esther and her people fasted and prayed for God’s direction, Esther planned a banquet for the king and Haman. During the banquet, Esther revealed Haman’s plot and the fact that she was a Jew. The King condemned Haman to die and saved the Jewish nation. In short, God raised Esther up to save her people!

Esther was a chosen woman just like us, with hopes and dreams, strengths and weaknesses. She was imperfect, insecure and yet chosen. Because she took the right steps, Esther was chosen queen. Because she made the right choices, she discovered her true worth in God. If Esther can take those steps, so can we.

You are no accident!

Where you are is no surprise to God!

Situational ethics is now being taught in many schools. One teacher, wanting to illustrate that human reasoning is many times wrong, gave the following situation to a class of students: “How would you advise a mother who was pregnant with her fifth child based on the following facts. Her husband had syphilis. She had tuberculosis. Their first child was born blind, their second child died while their third child was born deaf and the fourth child had tuberculosis. The mother is considering an abortion. Would you advise her to have one?” Most of the students agreed that she should have an abortion. The teacher then announced, “If you said ‘Yes’ you would have just killed the great composer Ludwig von Beethoven!”

You and I were created in response to the love of God.

I praise You because You made me in an amazing and wonderful way. What You have done is wonderful. I know this very well. You saw my bones being formed as I took shape in my mother’s body. When I was put together there, You saw my body as it was formed. All the days planned for me were written in Your book before I was one day old (Psalm 139:14-16, NCV).

In this verse, “LORD” literally means “Father” or “dearest daddy.” We were not created to be His puppet. We were created for an intimate relationship with God. He created us and chose us. And just as God had a special plan for Esther, He has a special plan for you.

I know what I am planning for you, says the LORD. I have good plans for you, not plans to hurt you. I will give you hope and a good future (Jeremiah 29:11, NCV).

The best plan for our lives rests solely in the hands of the One who created us. God is our creator. When our lives are broken, He can heal them. When the plan falls apart, He can put it back together! We not only find our strength in that truth, but we find the core message of our calling as well. We are wanted, loved and cherished by God. We belong to Him. We are chosen.

Thank You for loving me, God. Honestly, I don’t understand that kind of love; a love that sent Jesus Christ to the cross so that I can live. But today, I celebrate Your love. Help me remember I am chosen and because I am chosen, I will never be alone or abandoned. You created me for a personal relationship with You. I am not an accident and I am not a mistake. Today, I celebrate the fact that I am a chosen child of the King.
In Jesus’ Name, Amen.

Find seven Bible verses that talk about the love of God. Begin by reading Psalm 139. Write each verse in your journal. Memorize one verse a day for the next seven days and share the verse with someone you love.

Jesus lived and died so that we can experience joy! Mary’s spiral bound journal, Joy for the Journey, will 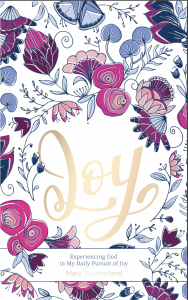 help guide you to a place of contentment and joy.

Be sure to check out the FREE MP3s on Mary’s website and connect with Mary through email at mary@marysoutherland.com or on Facebook.

© 2021 by Mary Southerland. All rights reserved.

3 Responses to “The Chosen Woman”

The Pathway to Peace

Two Are Better Than One

When You Can’t See What God is Doing