That Little Sneaky Path to a Bad Place

He leads me in the paths of righteousness for His name’s sake.

One Sunday my pastor had to do some housekeepin’ fussin’ at our congregation before he started his sermon. It was a “visitors, close your ears” moment as Jimmy interrupted the service for an important message from our neighbors. 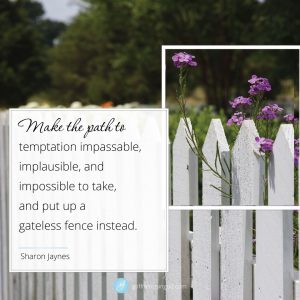 See, right beside our church property is a city park. On Sundays, when our parking lot is full, we tend to use the city park lot for our overflow parking. The only problem is that the folks going to the city park don’t like the fact that those daggum CHURCH people are taking their parking spaces.

And while our sweet pastor calmly asked the congregation, once again, to STOP PARKING IN THE CITY PARK PARKING LOT (he didn’t yell, but I bet he wanted to), folks still do it. As soon as Jimmy finished his announcement and began his sermon, God had a sermon just for me. He wasn’t finished with me and the forbidden parking lot issue. That’s what happens when you make a path or keep a path open, He seemed to say, “You’re going to walk down it eventually.”

See, while we have been warned, scolded, and pleaded with not to park next door, there is this nice little path through the bushes from the city park’s parking lot to our church’s parking lot. The bushes are trimmed on both sides, cobblestones are succinctly placed, and a nice little bit of concrete forms a gently curving sidewalk. Someone keeps the bushes clipped and the grass maintained. The breezeway almost beckons us (me) to break the rules.

Now let’s go down a different path. Let’s call the path sin. Let’s say that you have decided that once and for all you are not going to park yourself in the parking lot of a particular sin.

There are hundreds of vices you could put in that sentence. But then there’s a nicely groomed little path that you’ve kept open…just in case. You wouldn’t call it “just in case.” You wouldn’t say it out loud.

The paths beckon you. And as long as you keep the breezeways open, you’ll probably breeze right through them…eventually.

The answer? Remove the path. Put up a gateless fence.

Make the path to temptation impassable, implausible, and impossible to take, and put up a gateless fence instead.

Jesus said, “If your eye causes you to sin, pluck it out” (Matthew 5:29 NKJV). That is pretty dramatic. I’m not telling you to pluck out your eye, and I’m not sure that’s what Jesus was saying either. But He was telling us to remove the cause of the temptation.

Remove the path. Put up a fence.

So here’s my question: Do you need to put up a fence where you now have a path?

Heavenly Father, thank You for always giving me a way of escape. Forgive me for not always taking it. Help me to keep my resolve to put up a fence and close the paths to areas of my life that I have left open to sin.

I’m erecting a fence the moment I press the send button on this devotion. Because now that I’ve told you about my little parking lot dilemma, I will never park in the city park’s lot again. Just telling you about it holds me accountable.

And maybe, just maybe, I’ve hit on a way for you to begin placing fences where those paths have been…tell someone, and ask her to hold you accountable.

Go back and look at today’s truth. What do you think it means “for His name’s sake?”

I’ve been pondering that. Here’s how the New Living Version translates it. “He guides me along right paths, bringing honor to his name.”

Are you willing to honor God’s name today by putting up a fence and avoiding that tempting path? If so, click over to my Facebook page and say, “I’m shutting down the path.”

I’ve compiled one hundred of my favorites stories, along with Bible verses and prayers in one book, Listening to God Day by Day. It is the perfect jump-start at the beginning of the day,

pick-me-up during the day, or wind-down at the end of the day. The 15-minute devotional is also a great gift for a friend, especially one who is seeking a relationship with God or is new to the faith. While you’re there, check out my new LOVED, BLESSED, and STRONG bracelets!

5 Responses to “That Little Sneaky Path to a Bad Place”