“He burned the plowing equipment…”

Okay, that might be the strangest Bible verse I’ve written about in the 13 years of Girlfriends in God’s existence, but 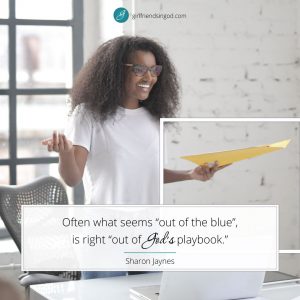 stick with me a moment.

Sometimes when I’m reading the Bible, one little sentence jumps out and grabs me by the heart. That’s what happened when I read 1 Kings 19:19-21. This was the day that Elijah the prophet called Elisha the farmer to take his place.

So Elijah went from there and found Elisha son of Shaphat. He was plowing with twelve yoke of oxen, and he himself was driving the twelfth pair. Elijah went up to him and threw his cloak around him. Elisha then left his oxen and ran after Elijah. “Let me kiss my father and mother goodbye,” he said, “and then I will come with you.”

So Elisha left him and went back. He took his yoke of oxen and slaughtered them. He burned the plowing equipment to cook the meat and gave it to the people, and they ate. Then he set out to follow Elijah and became his servant.

Let’s go back a moment and ponder these strange verses.

Elijah was a great prophet to whom God had given the power to speak a drought into existence, keep a widow’s pantry mysteriously stocked, raise a widow’s dead son, and eliminate 850 false prophets in one day. But Elijah, this mighty man of God, got tired and depressed. Yes, he did.

So, God decided it was time for Elijah to pass the baton to a younger man and led him to a fellow plowing his field.

Elisha was just minding his own business and doing his job when Elijah walked up and threw his cloak over him. I’m sure it seemed very “out of the blue” to this young man. But I’ve learned that often times what seems “out of the blue, is right “out of God’s playbook.” God had had this in the works for quite some” time.

We don’t know much about Elisha. He was just a workingman. Every day, he got up out of bed, hooked up the oxen, and looked at their backsides. Nothing special. Nothing extraordinary. Just a workingman.

But God had a plan; God chose a man.

Now, here’s what grabbed my heart. After Elijah threw his mantle over Elisha, which was a sign that he was passing his prophetical anointing to the younger man, Elisha went back to tell his family goodbye. He also had a giant barbeque celebration and sacrificed his oxen. He didn’t keep a few just in case this prophet gig didn’t work out. He even burned the plow.

He burned the symbol of his former life.

He burned the source of his former livelihood.

There was no turning back.

There was no plan B.

There was no safety net.

It made me stop and think about my own commitment to Christ. Sure, I sing, “I have decided, to follow Jesus. No turning back. No turning back.” But are there parts of my old life that I hang on to? Old habits? Old desires? Old grudges?

Are there parts of your old life that you are hanging on to? Old habits? Old desires? Old grudges?

Paul wrote, “But one thing I do: Forgetting what is behind and straining toward what is ahead, I press on toward the goal to win the prize for which God has called me heavenward in Christ Jesus” (Philippians 3:13b,14 NIV). Paul left behind his former life and was, as we say today, “all in.”

As long as our new lives in Christ are tethered to our past lives, we will never experience the abundant, exciting, adventurous faith filled life with signs, wonder and power.

Is there something from your pre-Christ days that you have dragged into your present-Christ days that you need to leave behind? Maybe it’s not even a pre-Christ habit, relationship, or a way of thinking, but something you’ve picked up along the way that clings to you like spiritual chiggers. If so, let’s burn the plow. Let’s leave it behind and move forward into God’s call on our lives with a whole heart.

Heavenly Father, thank You for choosing me to be Your child. I am “all in.” I have no plan B. You are my life.

What could the plow represent in your life?

Is there anything that God is calling you to leave behind once and for all? Resentment? A relationship? A habit? An attachment? Anger? Regret?

If you’re ready to be “all in,” then leave a comment and let’s agree together.

Are you ready to live “all in” for Jesus? Are you ready to take hold of everything that Jesus has already taken hold of for you and placed in you? Then this book is for you! Thousands of women have learned how to let go of everything that holds them back, move forward with all that God promises, and live the adventurous faith of bold believing through the teaching of my book, Take Hold of the Faith You Long For. It’s time to uncover the untapped sources of confidence and courage, and see how to move from simply knowing the truth to actually living it out!

And for you married gals, have apathy and indifference has crept into your marriage and you don’t know what to do about it? Has your soulmate turned into just a roommate? Then check out my book Lovestruck and get out of that funk! Learn how to get Lovestruck all over again. This book answers everything you were dying to know about the Song of Solomon but were afraid to ask!