Miracles and the Making of Real Faith

When He had taken the seven loaves and given thanks, He broke them and gave them to His disciples to distribute to the people, and they did so … The people ate and were satisfied.

The Gospel of Mark says four thousand people came to hear Jesus speak that day. Of course, this wasn’t the first time a crowd had gathered. By now, the disciples were used to men, women and children pressing close to the One 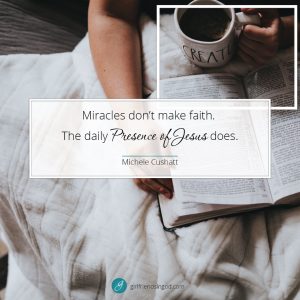 who spoke of heaven as if it was present and here for the taking.

But this time the crowd stayed for three straight days. I imagine they slept on the grass, curled up in families in an attempt to ward off the cold. They wore the same clothes and went without showers. Worse yet, they’d long since consumed their sack lunches. That means, in their hunger for more of Jesus, they’d failed to eat.

This is why Jesus told his disciples to give them food, maybe walk to the nearest Piggly Wiggly and pick up a few things. He didn’t want to send them home without doing something to ease their hunger.

But the disciples balked, as would most of us. It’s hard enough for me to feed my family of eight. But four thousand?! Piggly Wiggly and I panic at the thought. That’s why the disciples questioned Jesus’ suggestion. Where in the world would they get enough food?!

How soon we forget the last miracle when we’re aching for a new one.

Two chapters earlier, Mark says another crowd gathered (Mark 6). This one was even bigger, with more than 5,000 hungry men, women and children circled up in the middle of nowhere to hear Jesus preach. Similarly, Jesus had told them to feed the people. And, similarly, they thought he’d lost his mind. But that day they watched Jesus turn five loaves of bread and two fishes into a Costco-sized miracle. Every one of the 5,000 ate until they couldn’t eat another bite. And when the disciples walked around to gather up the leftovers, twelve overflowing baskets testified to the miracle they’d just witnessed.

Now, here they were again. Faced with a similar hunger problem. And wrestling with the same disbelief and doubt problem.

Which leads me to an important truth each one of us must face:

How many times have I prayed, “God, if only you would answer this prayer, I would believe”? Then, when He delivered, I danced and celebrated the reality of my God.

Then, days, months or years pass and I forget both God’s provision and my faith promise. And when another impossibility lands square in my path, I again push back and doubt the God who so clearly delivered in the days and years before.

Same doubt, different day. Rather than continue to celebrate His presence and past faithfulness, I lose myself in my worry over the current crisis and its many unknowns.

Miracles don’t make faith. The daily Presence of Jesus does.

God may feed our multitude of need today, but that doesn’t mean we’ll believe His sufficiency tomorrow. At some point—hopefully sooner than later—you and I must decide what we believe about Jesus, regardless of what He does or doesn’t do. We have more than enough evidence of His identity. And He has already shown Himself able to feed the hungry.

Will we trust Him? Will we believe that no matter what comes, He will satisfy our deepest needs?

It’s time to believe and not doubt, to trust and not worry. Because His presence is the real miracle we need most of all.

Dear Lord, I hunger for more of You. I long to have the kind of belief that confidently embraces impossible circumstances knowing that You are with me in them. I don’t need another miracle. I need more of YOU. Help me to remember what You’ve already done in my life. And use those memories to strengthen my faith in Your provision and purpose today.

What impossibility are you facing today? Go ahead and name it. But rather than spend your day ruminating on the problem and all that could go wrong, spend intentional time remembering God’s faithfulness in the many days leading up to this one. Write down every time God showed up in an impossible circumstance and satisfied you’re hunger for more of him.

A storyteller at heart, Michele Cushatt writes and speaks on the necessity of perseverance, leadership and faith in the hard places. A three-time tongue cancer survivor and mama to children “from hard places,” Michele is a (reluctant) expert of pain, trauma and our deep human need for real connection. She lives in Colorado with her husband and their six children, ages 11 to 26. Find out more about Michele at www.MicheleCushatt.com.

3 Responses to “Miracles and the Making of Real Faith”

Dirt Slingers and Comfort Bringers by: Sharon Jaynes
Have you ever felt like someone just knocked you over with words…not caring how it made you feel? I know I have. One day my Golden Retriever…
buff.ly/2Eline4 ...

Lord, I want to be a comfort bringer not a dirt slinger. Show me a friend who has been knocked down by life and give me the right words to brace them back up. In Jesus’ Name, Amen.
buff.ly/2Eline4 ...

But Being Healthy is Boring! By: MarySoutherland
I have struggled with weight issues since I was a little girl. Part of my struggle is rooted in “fluffy” genes lovingly passed down to me through…