How to Melt a Cold Shoulder

Have you noticed that it is difficult to feel romantic with your man when you’re mad at him? It’s almost impossible to feel like giving him a big hug when you have anger, bitterness, and 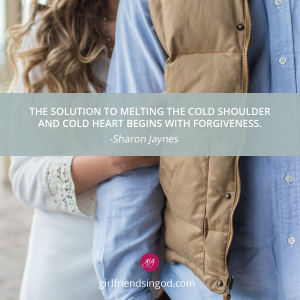 resentment in your heart. The solution to melting the cold shoulder and cold heart begins with forgiveness. Ouch!

“But even if he is absolutely fully to blame we still have to forgive him; and even if ninety-nine percent of his apparent guilt can be explained away by really good excuses, the problem of forgiveness begins with the one percent guilt which is left over. To excuse what can really produce good excuses is not Christian character; it is only fairness. To be a Christian means to forgive the inexcusable, because God has forgiven the inexcusable in you.”

Paul said it this way: “Be kind to one another, tenderhearted, forgiving one another, as God in Christ forgave you” (Ephesians 4:32 ESV).

Lewis also wrote, “Everyone says forgiveness is a lovely idea until they have something to forgive.” I wholeheartedly agree. Forgiveness can be especially difficult when the one who hurt you is the man who promised to love and cherish you all the days of your life. But what is more difficult is to have a strong marriage without forgiveness.

In no way does forgiveness mean turning a blind eye to a problem that needs attention. Pornography, alcoholism, drug abuse, and a plethora of other addictions must be addressed and dealt with for any marriage to survive and thrive. A wife is not doing her husband any favors by allowing such behavior to continue. To ignore such behavior is to enable sin to continue and deposit droplets of poison into a man’s soul. However, keeping a record of wrongs is like allowing termites to destroy the foundation of the marriage.

I recently received an email from a woman who was still bitter over a statement her husband made to her cousin ten years ago. She and her husband were preparing to celebrate their fiftieth wedding anniversary, and she was dreading it because of his careless words a decade ago. She wrote, “Please pray that God mends this title piece of my heart that has fallen to the ground.”

The word title was a typo—she meant to type little. To me, it was telling. Friend, we can allow our husband’s little shortcomings to become the title of our story, or we can forgive and write a new storyline.

The first step to forgiveness is prayer. The Bible tells us to pray for our enemies. I hope your husband is never your enemy, but I can assure you, on some days he may feel like it. So let’s follow God’s instruction and pray for him. It may not turn your husband’s hardened heart to putty in your hands, but it will melt the hardness of resentment in your own.

Lord, sometimes I get so mad at my husband. But to be honest, I know he gets mad at me too. Help me not to expect perfection, but give affection. Help me to forgive him when he hurts my feelings, just as I pray he will forgive me for hurting his. Help us both to forgive as You have forgiven us.

Paul wrote: “Bear with each other and forgive one another if any of you has a grievance against someone. Forgive as the Lord forgave you” (Colossians 3:13 NIV).

How has the Lord forgiven you?

In light of that, how are we to forgive our husbands?

Today’s devotion was adapted from my book, A 14-Day Romance Challenge: Reigniting Passion in Your Marriage. Click here for a fun video sure to make you smile! I’m offering a special Valentine’s Marriage Bundle with discounts on four of my favorite marriage resources from February 1-16, so click on over!. Let’s make 2018 a year to strengthen our marriages and pray for our men.

3 Responses to “How to Melt a Cold Shoulder”