When words are many, sin is not absent, but he who holds his tongue is wise.

I love reading WWII books and watching WWII movies and documentaries. During the war, the War 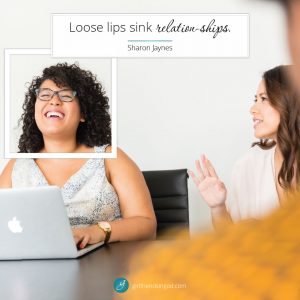 Advertising Council created propaganda posters as part of a campaign to advise servicemen and citizens to avoid careless talk concerning secure information that might be used by the enemy.

The gist of the slogan was to remind people to avoid talking about ship movements. The fear was that covert enemy agents might hear the comments, intercept the war effort, and destroy the ships. Thus, “Loose Lips Sink Ships” signs were posted on factory walls across America.

Loose lips still sink ships. Perhaps we need to hang a sign in our homes that says, “Loose lips sink relation-ships.” Choose wisely. Don’t allow the loose lips of sarcasm, criticism, or anger poke holes in the hull of your hunky man or mast of your marvelous kids. A moment of restraint can save a boatload of hurt.

Solomon wrote: “When words are many, sin is not absent, but he who holds his tongue is wise” (Proverbs 10:19). “Even a fool is thought wise if he keeps silent, and discerning if he holds his tongue” (Proverbs 17:28). Whether the subject is gossip or grumbling, silence is the golden key that keeps the door to destructive words locked away. And sometimes the most powerful words of a woman are no words at all, for silence can be an outward sign of inward strength.

I was having lunch with a group of friends when one gal made a derogatory comment about another from the group who was late. I gave her that “motherly look” that letting her know the comment wasn’t appropriate.

“Just because something is true doesn’t mean that you should say it,” I answered.

You know where I learned that? The Holy Spirit speaks that to me almost every day. Unfortunately, I have ignored Him more times than I’d like to admit, and I have spoken words I have later regretted. Like David, I plead with God to “set a guard over my mouth, O Lord; keep watch over the door of my lips” (Psalm 141:3).

The book of Proverbs is filled with wise words about the use of our words:

[She] who guards her lips guards [her] life, but [she] who speaks rashly will come

The summer before my senior year in high school I studied French with a group of English-speaking foreign exchange students. As part of our training, we were allowed to only speak French during mealtimes. If we slipped and said a word in English, we had to put a coin into a bowl in the middle of the table. It was the quietest bunch of teenagers sitting around a dinner table you’ve ever seen! In reality, saying an inappropriate word will cost more than a few coins. It can cost a relationship.

Some of the most poignant moments of Jesus’ arrest were the silent ones. “He was oppressed and afflicted, yet he did not open his mouth; he was led like a lamb to the slaughter, and as a sheep before her shearers is silent, so he did not open his mouth” (Isaiah 53:7). And for you and me, some of our most powerful moments will be the ones in which we remain silent. Some of the most powerful words are the ones that are withheld.

Heavenly Father, I know the death and life of a relationship is often in the tongue. Help me to control of my tongue, to think before I speak. Help me to speak words that are true, helpful, inspiring, necessary, and kind.

Think of a time when someone said something to you that hurt you deeply. Do you think they thought before they spoke or just let the loose lips run free?

Consider writing the THINK acronym on a note card and keep in your purse. 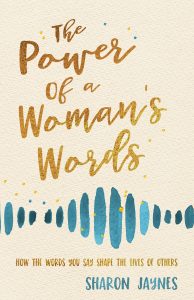 Sharon’s best-selling book, The Power of a Woman’s Words: How the Words You Speak Shape the Lives of Others and Bible study guide are being re-released with new content, including a chapter on the power of a woman’s words to her adult children…it’s complicated! Pre-order before April 21, 2020 and receive a free downloadable e-book of Enough: Silencing the Lies that Steal Your Confidence plus much more! Click here for details.

Dear God, You truly are the Light who comes into our darkest places. Today I need You to shine on this area of my life: ______. Thank You for Your faithfulness and for the promise that no night will last forever. In Jesus’ Name, Amen.buff.ly/2Eline4 ...

Want strength in your struggle? Turn your eyes from your situation to your Savior. #TrustingGod buff.ly/2w6eGV5 ...

“Just trust me.” Those are the words we hear in movies just before something bad is about to happen. And yet, we are told to trust God. In a culture where we’re taught to take control of our own lives, trusting God has become a religious platitude rather than a life-changing attitude. We say i...
View on Facebook
· Share

My curiosity begs to understand life. My mind longs for logic. When I was a child, I asked a million questions. Why is the sky blue? Are all angels men? Why do bad things happen? Why can't we send my Brussel sprouts to the starving children in Africa? Who created God? I wanted answers. I still do. Give me a story that grabs my attention at the beginning. Fill it with intrigue. Throw in some high conflict and drama in the middle and then catch the bad guys, tie up the loose ends and call it done. Cue the applause. Bring down the curtain. But don’t even think about leaving me hanging… and certainly don’t ask me to tune in next week for the missing story-pieces. Now that you're clued in on a bit of my crazy, you can imagine how I reacted as a youngster when the concept of infinity was introduced in math class. Suit me up for a strait jacket and take me to a rubber room. I thought my math teacher was nuts. You mean I’m supposed to comprehend, work with, and accept something that has no beginning and no ending? Really? That’s not neat. It’s not simple. It makes my brain hurt to even think about it! Pure frustration, packaged in a sideways figure eight. A mind-maddening math mystery. Infinity. Once I rose above the psychological drama-trauma of this new math concept, I figured out how to solve problems with infinity: even though I couldn’t fully wrap my brain around it. I completed my homework assignments and passed the tests without so much as running my fingernails down the chalkboard in a defiant, adolescent tantrum of revolt. Miracle. Similarly, there are a few characteristics of God that I find difficult to grasp. As you may have guessed, His eternal nature is one. It’s not easy to understand. As much as my inner four-year-old would like it to, the Bible does not begin with once upon a time, and it does not end with and they all lived happily ever after. The love saga of God, written in crimson by Christ, is a mystery that began before the dawn of time and goes on forever. God's existence defies space, matter and time. It transcends it! Let what Scripture has to say about the Lord's eternal nature blow your mind for a minute…"Behold, God is great, and we know him not; the number of his years is unsearchable" (Job 36:26)."Have you not known? Have you not heard? The LORD is the everlasting God, the Creator of the ends of the earth. He does not faint or grow weary; his understanding is unsearchable" (Isaiah 40:28).God is great. He's unsearchable! There's no one else like Him, not one. Not now. Not ever. He is El Olam: The Everlasting God, El meaning “mighty one,” Olam meaning world, universe, everlasting time or space. His existence cannot be featured on a timeline because it doesn't come neatly packaged with a clearly defined beginning and ending. In fact, He is the Beginning and the End – the Alpha and Omega – the First and the Last. You and I run out of energy. We grow weary. We lose heart. God never does. The Everlasting God does not faint or grow weary and when we call out to Him, He renews our strength and revives our hope. Yeah. I’m the girl who wants life to make sense, but I’ve been learning that there are some things in life that we just need to accept, rather than understand. Things we need to take at face value… at faith value. For me, this is one of them. I worship El Olam – who was and is and is to come. Infinite Grace. And I’m grateful that on the day my lungs exhale my final earthly breath, and my eyes lift to see Jesus face to face, all my questions will be not only satisfied, but also forgotten. Not just for a moment, but for all eternity. buff.ly/2Eline4 ...

Father, it seems that a seed of discontent has tak

Dear Lord, thank You for accomplishing Your healin

El Shaddai, there is nothing too hard for You. You

Father, I want to know You and find Your plan for

Dear Lord, sometimes I do not feel that great abou

Dear Lord, I'm so thankful that Your mercy is grea

Jesus, I am a doer and I sometimes find that I am

Father, thank You for the hard times because they

Father, thank You for the job You have given me. P

Dear God, You made us to love You and to love othe

God Is Not Afraid of the Dark

How to Find Contentment

Evidence of God’s Faithfulness in Our Hardships

Whatever You Need, God Is