Looking for Those in Pain

Each one should use whatever gift he has received to serve others.

Hamburgers are a regular item on the Southerland summer menu … for several reasons.

Hamburgers are inexpensive, easy to prepare, and scrumptious. 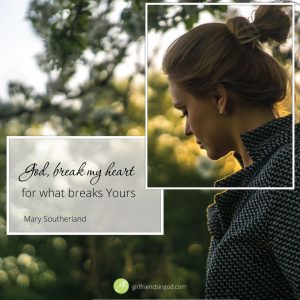 Hamburgers can be cooked outside. We live in Kansas where the summer heat can be brutal. Why add to the rising temperature outside by turning on an oven inside?

On one particular hamburger-kind-of night, my husband offered to do the grilling, but he had just gotten home from work and looked like he needed a nap more than he needed to grill anything.

Being the wonderful wife that I am, I said, “Honey, why don’t you take a quick nap while I grill the hamburgers?” Being the wonderful husband that he is, Dan responded, “I will be glad to do that for you. It really is hot outside.”

I should have taken him up on his offer.

I didn’t want to be in the scorching heat one minute longer than I had to be, so I quickly seasoned the hamburger patties, slapped them on the grill, and headed back inside.

Our daughter met me at the door with our grandson who was looking for his Mimi. That’s me.

When Justus saw me, he smiled and stretched out his chubby little arms for me to hold him. I immediately accepted his invitation and promptly forgot about the hamburgers sizzling on the grill – until Danna asked what we were having for dinner.

As visions of charred hamburger patties danced through my head, I made a mad dash to rescue our meal.

I breathed a sigh of relief when I saw that the hamburgers were still edible – barely – but a little charcoal is a healthy addition to any diet – right?

I quickly transferred the hamburgers to a plate, closed the lid on the grill, and turned to head inside. My foot caught on the leg of a patio chair. I stumbled, juggling the plate of meat in my hand.

I was not about to give up those hamburgers without a fight!

Instinctively, I reached out for something to break my fall … and found the grill – with three fingers.

Have you ever had an accident that seemed to happen in slow motion? I could feel the searing heat followed by the temporary numbness that accompanies second- and third-degree burns.

Ice! I needed ice and water!

I raced into the house, dropped the plate of burgers on the dinner table, and said, “Let’s eat!” Leaning over the kitchen sink, I turned the cold water on full blast, hoping it would ease the growing pain. It didn’t.

We tried every pain reliever we had, and finally resorted to soaking the injured fingers in a small bowl of ice water – which really did help – but when large blisters began to appear, Dan and I headed to Urgent Care.

As the doctor applied a burn cream, I asked, “Will it stop the pain?” The nurse had taken my bowl of ice water, and I couldn’t believe how badly those three fingers hurt! “It won’t actually stop the pain, but it will help the burns heal and prevent infection. I’ll give you a painkiller for the next couple of days,” she explained. When she handed me the prescription, I was surprised. It was the same pain medication I had once taken after major surgery.

I am not a doctor but taking pain medication that affects the whole body seems like overkill when only three fingers are in pain. But as the hours passed, I was very thankful for each little pill. Every part of my body was screaming, “Pay attention to the fingers! We hurt!”

The Body of Christ should function the same way.

Instead, we often shoot our wounded and leave them lying in the dirt to find help on their own.

The problem is not always that we are unwilling to help someone in pain. We are simply blind to the fact that they exist. We overlook hurting people because we are in a hurry or because we don’t want to deal with the mess of a broken life.

Jesus Christ willingly gave up Heaven and came to Earth as a man … and went straight for the messiest lives, those in the greatest pain … the losers and the misfits.

Jesus felt every pain we have ever felt or ever will feel.

Jesus was misunderstood and slandered.

Jesus was beaten, tortured, and then crucified to pay for our sin.

It must break the heart of God when we so easily toss aside what cost Him so very much … the chance to help one of His broken lambs.

Look around you! Someone needs you to see them – to really feel their pain and then be willing to do something about it.

Father, forgive me for the times I could have made a difference in the life of someone who was hurting, but didn’t because I was too busy or just didn’t care enough. Break my heart for what breaks Yours. Teach me to recognize the wounded hearts You send my way.

Read Matthew 28:19-20. These verses are commonly referred to as “The Great Commission.” What would it look like if you really applied these truths to your daily life?

So many women have told me that they really want to study the Bible, but they just don’t know how. The

Word of God is our blueprint for life. If we want to discover and live out God’s plan, we must know the Word of God. Mary’s book, How To Study The Bible is a simple and effective guide to get God’s Word into your life.

7 Responses to “Looking for Those in Pain”

I am such a mess. I hate how I am. I can’t ever get a handle on this issue.

But He said to me, “My grace is sufficient for you, for my power is made perfect in weakness.” Therefore, I will boast all the more gladly about my weaknesses, so that Christ’s power may rest on me.
View on Facebook
·Share