But you will not even need to fight. Take your positions; then stand still and watch the Lord's victory. He is with you, O people of Judah and Jerusalem. Do not be afraid or discouraged. Go out there tomorrow, for the Lord is with you! 2 Chronicles 20:17 (NLT)

I was on the way to the airport when the phone call came. 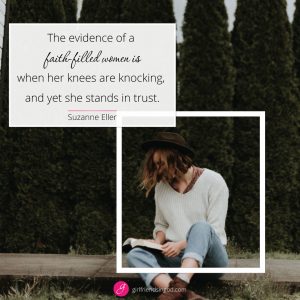 “Mom, it was positive,” my daughter said, sorrow thick in her voice.

This didn’t refer to a long-awaited pregnancy or a good report of any kind. Instead, it was the result of a biopsy for breast cancer.

This was familiar territory. I was a 31-year-old mom when I received the same news. I remember scooping up our children one by one to explain as gently as we knew how, trying to prepare them for the multiple surgeries, chemotherapy, and radiation ahead. Now my daughter, one of those little ones I once held close, was about to walk that same path.

Bad news can make your knees knock. I stumbled into the airport, found a bathroom, shut the stall door, and let the tears roll. Going through cancer myself was one thing, but it felt a hundred times harder knowing my daughter was about to face it too.

In 2 Chronicles, Jehoshaphat received bad news. A mighty army was on the way to destroy his kingdom.

Perhaps King Jehoshaphat’s knees were a little wobbly as he prayed this prayer:

O our God, won’t you stop them? We are powerless against this mighty army that is about to attack us. We do not know what to do, but we are looking to you for help. (2 Chronicles 20:12 NLT)

I love is that this young king didn’t pretend he had it all under control. Shortly after, this encouraging word came.

But you will not even need to fight. Take your positions; then stand still and watch the Lord’s victory. He is with you, O people of Judah and Jerusalem. Do not be afraid or discouraged. Go out there tomorrow, for the Lord is with you! (2 Chronicles 20:17)

The battle raged on. The army was still marching toward the city. Yet God would fight on his behalf. The weight of the battle was no longer solely on King Jehoshaphat’s shoulders.

That didn’t mean he didn’t have a part to play. His role was to take a position of trust.

Maybe you are in a battle right now that seems too big. Maybe, like me, you find yourself tucked away in a bathroom, tears running down your cheeks. In times like these, we can feel that somehow, we aren’t faith-filled or strong.

You are in position.

Yes, your knees are knocking and that makes sense, but you are sharing those fears with the One who loves you most. You have invited Him into the battle and are looking for God in the midst of it all.

My daughter made it through that hard, hard place, and I am deeply grateful, but that didn’t mean there weren’t more or different battles ahead. I know that when my knees knock at hard news, I know where to go with it. I may be crying in the bathroom, but it is because I know my words are reaching God’s ears.

Our knocking knees become an outward reflection of faith as they carry us to the One who promises to fight that battle with us.

Let’s Pray
God, this battle is bigger than me. Thank You that I can be honest about that. It feels impossible, and yet I know where to turn. My knees are knocking, but my feet are running to You. I trust in You. Thank You for fighting for me.
In Jesus’ Name, Amen.

Too often, we feel that to be strong or faith-filled means we can’t admit how big the battle is or how ill-equipped we feel to fight it.

Today, will you redefine the words “strong” and “faith-filled?” Include the bravery it takes to be honest about the battle and invite God into it, even when it feels too big.

“God not only cares about how we feel, He created us to feel.”

In Suzanne’s book, JoyKeeper: 6 Truths That Change Everything You Thought You Knew About Joy, discover the 6 surprising truths that change the way you know joy, keep joy, and live joy.