It’s Written All Over Your Face

[Jacob said to Esau,] “To see your face is like seeing the face of God, now that you have received me favorably” (Genesis 33:10 NIV).

Have you ever held a grudge? That’s a silly question. I think we all have. I remember when Nancy Davis asked the boy I 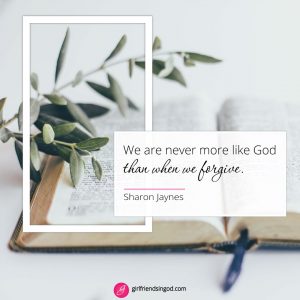 had my eye on to the high school dance. Can we all say G-r-u-d-g-e with an extra grrrr?

Esau, now that’s a biblical character who held a grudge…and rightly so. His brother Jacob and his momma grabbed the pen right out of God’s hand, as if God needed help writing their story. While Esau’s mother, Rebekah, was pregnant, God told her:

Two nations are in your womb,

and two peoples from within you will be separated;

one people will be stronger than the other,

Rebekah did indeed give birth to two very unidentical twin brothers—hairy Esau and smooth Jacob. The name Jacob means “heel grabber.” The boys wrestled in the womb and Jacob, though born second, came out hanging onto his older brother’s heel. That might have been a fun story to tell at a party if Jacob hadn’t continued to try to gain one-upmanship on Esau.

When Esau learned of the deception, he begged his father to renege and reverse the oath. When he wouldn’t, or rather couldn’t, Esau vowed to kill his brother. “Esau held a grudge against Jacob because of the blessing his father had given him. He said to himself, ‘The days of mourning for my father are near; then I will kill my brother Jacob’” (Genesis 27:41).

The Hebrew word translated “grudge” means to cherish animosity against. I doubt many would admit that they cherish the hate they have toward another, but it’s easy to do. You take care of what you cherish. Dust it off. Shine it up. Hold it dear. Unforgiveness sits on the shelf of the heart, as a beloved trophy.

For the next twenty-one years, Jacob hid from his angry brother as a fugitive in Haran. Finally, he decided he really wanted to go home. There was just one problem—Esau, who had vowed to kill him.

Jacob said to Esau, “To see your face is like seeing the face of God, now that you have received me favorably” (Genesis 33:10).

Seeing forgiveness face-to-face is like seeing the face of God. Isn’t that the most beautiful image? If we were sitting together sharing a cup of coffee, I’d want to chat long about that. Can you think of a time when someone forgave you and it felt as if you were looking into the face of God? I have. We are never more like God than when we forgive.

Interestingly, the name Jacob means “trickster,” but God changed it to Israel, which means “triumphant with God.” Jacob’s worst chapter became his greatest victory, and it all began with forgiveness.

Heavenly Father, I want to reflect Your glory. When people look at me, I want them to see the reflection of Your love and not the reflection of pent up grudges. Help me to let go of grudges and take hold of grace.
In Jesus’ Name, Amen.

Can you think of any grudge that you have been holding onto for a long time or a few days? What do you think God is telling you to do with that grudge? 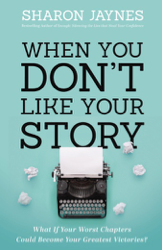 Many of us feel broken. Our mistakes, the pain others have caused us, and circumstances outside our control taunt us every day, though we long to turn a new page. My new book, When You Don’t Like Your Story, challenges us to ask: What if God doesn’t want us to rip out our difficult stories but repurpose them for good?

What has been done to you and what has been done through you does not disqualify you from God’s best for your life. It qualifies you for an even greater purpose than you would have ever known without it. In fact, the worst parts of your story might just be what God uses the most. So sink deep into God’s life-changing truths. The next chapter is just beginning. Includes an in-depth Bible study for individuals and groups. Click here to join Sharon’s FREE online When You Don’t Like Your Story Bible Study running February 15 – March 8.

2 Responses to “It’s Written All Over Your Face”