Impossible? Not With God

For God knew His people in advance, and He chose them to become like His Son … and having chosen them, He called them to come to Him. And having called them, He gave them right standing with Himself.

Most people recognize the familiar line from every Mission Impossible movie, “Your mission … should 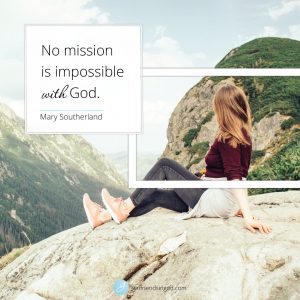 you choose to accept it … “

God asks us the same question. We have a God-given mission. We are called by God to be a blessing in the world where we live, work, and play. But we choose to accept or reject that mission every single day.

Sometimes the call of God seems to make no sense … almost ridiculous. Gideon felt that way when God called him.

Gideon was a farmer, a family man just trying to earn a living and put food on the table. He felt inadequate to carry out God’s plan for his life.

But God saw what Gideon could be … not just what he was.

The fact that the angel called Gideon a “mighty warrior” is just plain funny. Gideon didn’t look like a mighty warrior, and he certainly didn’t act like one. Wheat was usually threshed in an open area by oxen pulling threshing sleds over the stalks. But Gideon did his work in a winepress, hidden from the view of the Midianites.

I don’t blame Gideon. I would have hidden, too. The Midianites were terrorists – a large and powerful army of nomadic invaders. God wanted Gideon to defeat them and set the Israelites free. Seriously?

Gideon had never carried a weapon in his life, and God was asking him to defeat an army of 30,000 trained troops. I can imagine the look on Gideon’s face and the sheer panic in his heart when God told him the plan. Gideon’s response was so human and so like our own when God calls us to do something that seems impossible and makes no human sense at all.

You must have me confused with somebody else.

I come from the wrong side of the Manasseh tracks.

People like me don’t save nations and defeat armies.

I don’t think Gideon was being humble. I think he was terrified and convinced he was totally unqualified for the job God was asking him to do.

I know that feeling. I tend to use my weaknesses as excuses for disobedience instead of accepting them as opportunities for God to demonstrate His power in my life. God’s power shines best through obvious weakness.

Just like God was with the flawed Gideon, He is with us.

God’s commitment to Gideon reaffirmed His presence with Gideon and the ease with which Gideon would defeat the Midianites. The literal translation is “as if they were but one man.” I love it! Here was Gideon, probably the last man anyone would choose to face the Midianites, and God is telling him the victory will be so easy it will seem like he is facing one man instead of an army of fierce invaders.

Gideon still sputtered every excuse imaginable – reminding God how weak he was and questioning the validity of God’s choice. But God insisted Gideon was the man for the job.

Gideon called for help and 10,000 farmers came. God told Gideon he had too many fighters and helped him weed out all but 300 men. God then told Gideon to have his men carry a torch in one hand and a clay pot in the other. Now those are strange instructions! But God knew that a large army facing a small army would party the night before battle because they had nothing to fear.

God told Gideon to surround the camp and throw the clay pots on the floor. The crash startled the Midianites. When they saw the torches, the Midianites were confused because they knew a torch led each battalion. In fact, they were so confused that they began fighting themselves and were easily defeated by Gideon’s army.

God is completely aware of who we are and what we can and cannot do. When God calls us, He not only equips us, but He also empowers us to obey that calling. The Lord told Gideon to “go in the strength you have.” God was asking Gideon to step out in faith. Gideon’s meager strength would not be enough for the task ahead, but God was with Gideon … and that was more than enough.

The reality is that our strength is never enough for any task. That’s what faith is all about. Faith is a willingness to step out in mid-air, no safety net in sight – trusting God to be there – at the point of our greatest need.

No mission is impossible with God.

Father, I am just like Gideon. I want to trust You, but my faith is weak. I don’t understand how You can love someone like me … and to think that You have a special plan for my life is hard to believe. Help my unbelief, Lord.

Read and memorize Hebrews 11:1(NIV) “Now faith is confidence in what we hope for and assurance about what we do not see.” Are you ready to step out in faith and trust God?

If you need help learning how to trust God, get Mary’s new book, 10-Day Trust Adventure, to learn the steps you can take to accept and live out God’s mission for your life.

Be sure to drop by the page on Mary’s website with FREE MP3s. And connect with Mary on Facebook or through email. Want more of Mary’s devotions like this one? Sign up for Mary’s Blog.

3 Responses to “Impossible? Not With God”