Ignored by Man, Chosen by God

“If you belonged to the world, it would love you as its own. As it is, you do not belong to the world, but I have chosen you out of the world.”

Have you ever felt that you were overlooked or ignored…like you were a nobody? Well, take heart girlfriend. You are not alone. 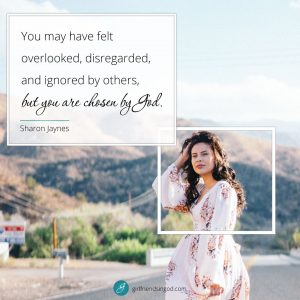 In the Bible, we read the story of when the prophet Samuel went to anoint the next king of Israel. By God’s instruction, Samuel traveled to Bethlehem to the house of Jesse. He knew where to go and what family the king would come from.   He knew the next king would be one of Jesse’s sons…he just didn’t know which son.

“Oh yeah, I do have one more son,” Jesse said. “I almost forgot all about him. Little David is out taking care of the sheep. I’ll send someone to get him.”

David was so insignificant to his own father, that when the prophet requested an audience with all of his boys, the dad didn’t even think to invite him. However, he was the very one God had selected to be the next ruler of His chosen people. How exciting! You may have felt overlooked, disregarded, and ignored, but God has chosen you!

So when you have that thought (which comes straight from the devil), that no one ever chooses you above all others, tell yourself the truth: I am chosen and highly favored by my God who loves me and gave His life for me.

Dear Father, thank You that I am chosen and dearly loved. While there have been many times in my life where I was not chosen, I rejoice that You chose me! Help me to be an encourager to others who may feel neglected or discarded by those in their world.

When was a time in your life when you felt rejected?

The Bible says that we have a High Priest (Jesus) who has felt all the pain and suffering just as we have. How was Jesus rejected?

At the same time, how was Jesus chosen by God?

Consider writing down the verses in today’s devotion and post them somewhere you can see them often.

Today’s devotion was taken from my book, Enough: Silencing the Lies that Steal Your Confidence.

Do the voices in your head tell you that you are not good enough, smart enough, pretty enough, or just not enough, period? If so, it’s time to stop listening to the lies that sabotage your confidence and start embracing the truth of your true identity in Christ. It’s time to overcome the lies of the enemy with the promises of God. This book will show you how.

Also available, just in time for Christmas, is the Enough bracelet to remind you that you are More than Enough every time you wear it!

2 Responses to “Ignored by Man, Chosen by God”