If You’ve Messed Up, You’re in Good Company 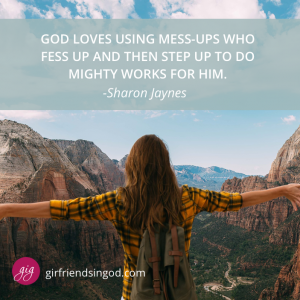 One by one the petals fall from the beautiful flower God created us to be. Like ticker tape, our fragmented pieces of confidence scatter over the streets as the parade passes by.

Unfortunately, I wasted many precious years held captive by the Enemy’s lies before I held up my chained hands to God and said, “I’m ready for You to cut me loose.”

Jacob was a liar.

Moses was a stutterer.

David was an adulterer.

Rahab was a prostitute.

Esther was an orphan.

Gideon is another one of God’s chosen leaders who argued that he wasn’t good enough. One day he was threshing wheat in a winepress when an angel of the Lord came to him. “The Lord is with you, mighty warrior,” the angel announced (Judges 6:12). Now, first of all, you don’t thresh wheat in a winepress. You thresh wheat in an open field by throwing it up in the air. The wind blows the chaff away and the grain falls to the ground. So what was Gideon doing in the winepress? He was so terrified of his enemies, the Midianites, that he was hiding. And yet, when the angel of the Lord came to him, he addressed Gideon as “mighty warrior.” No wonder Gideon said, “Pardon me” (6:13,15).

As soon as God called Gideon to greater things, Gideon began making excuses, allowing his insecurities and inadequacies to set limitations in his life. Gideon argued, “How can I save Israel? My clan is the weakest in Manasseh, and I am the least in my family” (6:15).

What about women in the Bible? When you turn the pages from the Old Testament to the New Testament, you can tell something is going to be different for women. In the Old Testament lineages, women were rarely mentioned. However, in Matthew, the first book of the New Testament, five women are listed in the lineage of Jesus. Of course, Mary, the mother of Jesus, is there—a teenage girl from Bethlehem. But who are the other four?

Tamar, who had an incestuous encounter with her father-in-law.

Rahab, who had been a prostitute in Jericho.

Ruth, who was a foreigner from a cursed people group in Moab.

Bathsheba, who had an affair with King David.

I’m so glad these women were listed. This shows us we can never go so far away from God that His grace can’t reach in to save us, and then use us. Each of these women would have probably thought they weren’t good enough if they had known how God was going to use them in His kingdom. What a beautiful example of what Paul wrote to the Corinthians:

Brothers and sisters, think of what you were when you were called. Not many of you were wise by human standards; not many were influential; not many were of noble birth. But God chose the foolish things of the world to shame the wise; God chose the weak things of the world to shame the strong. God chose the lowly things of this world and the despised things—and the things that are not—to nullify the things that are, so that no one may boast before him. It is because of him that you are in Christ Jesus, who has become for us wisdom from God—that is, our righteousness, holiness and redemption. Therefore, as it is written: “Let the one who boasts boast in the Lord (1 Corinthians 1:26-31).

No matter what mistakes you’ve made in your past, first of all, know you’re in good company. Secondly, know that God loves using mess-ups who fess up and then step up to do mighty works for Him.

God, I have made some big mistakes in my life. How encouraging to know that some of Your mighty men and women in the Bible messed up too. Help me to move past my failures and into the amazing future you have for me.

Are there any past failures in your life that you’re allowing to stand in the way of what God is calling you to do? If so, what are they? Say it out loud.

What do you think God would say about that? What did he say to Gideon?

Enough: Silencing the Lies that Steal Your Confidence exposes the lies that keep you bogged down in guilt, shame, and insecurity. By recognizing the lies, rejecting the lies, and replacing the lies with truth, you’ll be able to:

Want to join me in changing the way you think? Click over to the 7-Day Mindset Reset and let’s do it together.

6 Responses to “If You’ve Messed Up, You’re in Good Company”

Father, I celebrate the amazing truth that You chose to live in me and that my body is Your temple. Please forgive me when I abuse that temple. Forgive me when I fail to spend time in Your Word and at Your feet in prayer. I need Your strength and power to practice Godly discipline. I want to become healthy in every area of my life – for my good and for Your glory. In Jesus’ Name, Amen.
buff.ly/2Eline4 ...

The Rest You Really Need by: Gwen Smith
I had just arrived at my favorite coffee shop. As I opened the door, the smell of freshly brewed java greeted me and filled my creative mind…

God my Strength, You hold the rest that I need. Thank You for reminding me that I can always come to you and trade in my exhaustion for Your rejuvenation. Please restore my soul. In Jesus’ Name, Amen
buff.ly/2Eline4 ...

Dear Lord, I want to truly know you. I want to kno

Father, please forgive me when I allow my anger to

The Battle of the Aging