God’s Power Through My Weakness

When our son Jered began to walk, I noticed that his feet turned inward. A specialist ordered x-rays. The more he 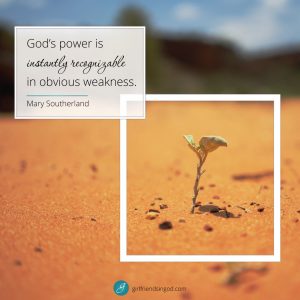 examined Jered, the more concerned we became. When we were finally called in for a consultation, we braced ourselves for bad news…just in case.

The doctor’s diagnosis was a gift. “There is nothing wrong with Jered’s feet,” he explained. “They are simply the feet of a natural athlete and were designed to give him great balance.” What we feared as weakness, an obstacle to overcome, was really a great strength. It was also part of God’s plan for Jered who attended college…on a football scholarship.

We were created by God, according to His plan, in love and with purpose – weaknesses and all. It seems logical to view our weaknesses as liabilities. Here’s the problem with that viewpoint.

Our worth doesn’t depend upon us in any way. We can and must be honest about our weaknesses, knowing they don’t diminish our value in the heart and mind of God. In fact, those limitations may become the areas through which He does His greatest work.

If you are like me, you may try to ignore weaknesses, hoping no one will notice. Some people live in denial, assigning blame to others when they fail. Eventually, we attempt to bury our weaknesses only to find them resurrecting themselves when we least expect it.

A powerful life embraces pain, brokenness and weakness, understanding that perfection is for Heaven, not Earth.

Paul certainly understood that truth and was trying to get his point across to the Church of Corinth. The Corinthians Christians had – like my Mama said – gotten a little too big for their britches. They began to think of themselves a little more highly than they should. Paul gently reminded them of the fact that in reality—they were just a bunch of nobodies. They weren’t geniuses. They weren’t wealthy. They weren’t powerful. But that’s okay, because that’s why God chose them.

Sounds crazy, doesn’t it? Definitely backwards. It certainly was to Gideon.

The Lord turned to him and said, ‘Go in the strength you have and save Israel out of Midian’s hand. Am I not sending you?’ (Judges 6:14, NIV).

Gideon used his weaknesses as an excuse for disobedience. Gideon’s act of threshing wheat in a winepress reflected both his fear of discovery by the Midianites, as well as Gideon’s small harvest. Wheat was normally threshed in an open area by oxen pulling threshing sledges over the stalks.

Gideon complained about God’s direction, “My clan is the weakest… and I am the least.” I would probably have said something similar since the Midianites were brutal terrorists. God wanted Gideon to defeat them, freeing the Israelites. Gideon’s response was so like our own when God calls us to do something that makes little sense and seems impossible.

God’s commitment to Gideon reaffirmed His presence with Gideon and the ease with which Gideon would defeat the Midianites. The literal translation is “as if they were but one man”. I love it! Here was Gideon, probably the last man anyone would choose to face the Midianites, but God says the victory will be so easy it will seem like he is facing one man instead of an army of fierce invaders. No matter how much Gideon whined, God said he was the man for the job.

When we are honest about our weaknesses, we are admitting that only God can accomplish anything good in or through us. God’s power is instantly recognizable in obvious weakness. Just like God was with the flawed Gideon, He is with us.

Father, I come to You – broken, shattered and desperate for You. I come to You in complete surrender. Please work though my life – weaknesses and all, Lord.
In Jesus’ Name, Amen. 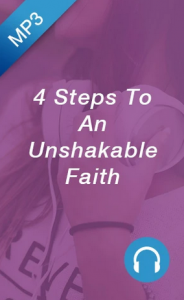 An unshakable faith is the foundation for the abundant life Jesus came to provide for us. In her MP3, Four Steps to an Unshakable Faith, Mary shares the four steps we can take to experience an unshakable faith and shows us how we can apply it to our lives. Check out

Be sure to check out the FREE MP3s on Mary’s website and connect with Mary through email at mary@marysoutherland.com or on Facebook.

© 2020 by Mary Southerland. All rights reserved.

One Response to “God’s Power Through My Weakness”