See what great love the Father has lavished on us, that we should be called children of God!

I became a Christian when I was a teenager. But even after I made a commitment to follow Christ, feelings of inferiority, insecurity, and inadequacy clung to me like a spider’s sticky web. The dirge 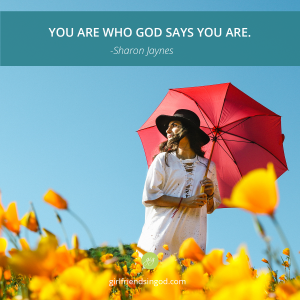 of “I’m not good enough” was a song I couldn’t get out of my head. The lies of the enemy created limitations in my life. They were the barbed wire that fenced me in and kept God’s best at bay.

Heavenly Father, thank You for choosing me to be your child. Today, I am choosing to believe that I am who You say that I am—a holy, dearly loved, child of Yours who is equipped by You, empowered by the Holy Spirit, and enveloped in Jesus Christ.

A mediocre, mundane faith is not your destiny! In Take Hold of the Faith You Long For: Let Go, Move Forward, Live Bold, I reveal the most common reasons we get stuck in our Christian faith. I show you how to break free of all that holds you back, move forward with all that God promises, and live the adventurous faith of bold believing. It’s time to leave behind feelings of inferiority, insecurity, and inadequacy that hold you hostage and take hold of the mountain-moving faith God intends. Let’s uncover untapped sources of confidence and courage, and see how to move from simply knowing the truth to actually living it out boldly in a life marked by true freedom and expectancy.

46 Responses to “You Are Who God Says You Are”

You Are Worth More by: Sharon Jaynes
As a little girl, I never felt I was worth very much. I always felt that I wasn’t pretty enough, smart enough, or good enough. I sensed my parents…
buff.ly/2Eline4 ...

Lord, thank You for caring about me and loving me. Sometimes I feel so worthless, but on those days, help me to remember my great worth to You. That’s all that really matters. In Jesus’ Name, Amen.