Do You Believe in Angels?

All the angels are spirits who serve God and are sent to help those who will receive salvation.

Diane was visiting in the home of some friends. Time passed quickly as each shared their various 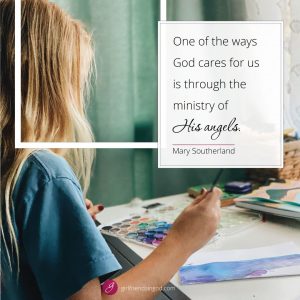 experiences of the past year. She ended up staying longer than she had planned and had to walk home alone. But she wasn’t afraid because it was a small town and she lived only a few blocks away. As she walked along under the tall elm trees, Diane whispered a prayer asking God to keep her safe from harm and danger.

When she reached the alley, which was a shortcut to her house, she decided to take it. However, halfway down the alley, she noticed a man standing at the end, as though he were waiting for her. She became uneasy and began to pray again, asking for God’s protection. Instantly a comforting sense of quietness and security wrapped around her; she felt as though someone was walking with her. When Diane reached the end of the alley, she walked right past the man and arrived home safely.

The following day, Diane read in the paper that a young girl had been raped in that same alley, just twenty minutes after she had been there. Overwhelmed by this tragedy and the fact that it could have been her, she began to weep.

Thanking the Lord for her safety and wanting to help the young woman who had been attacked, she decided to go to the police station. She told them her story and offered to help identify the assailant. The police asked if she would be willing to view a lineup, she agreed and immediately pointed out the man she had seen in the alley the night before.

When the man was told he had been identified, he immediately broke down and confessed. The officer thanked Diane for her bravery and asked if they could do anything for her. Diane was curious as to why the assailant had not attacked her. When the policeman asked him, his answer stunned them all, “Because she wasn’t alone. She had two tall men walking on either side of her.”

Do you believe in angels? I do. I believe that angels are real and are at work in our ordinary, everyday lives. I have personally sensed the presence of angels in my own life and have talked with many believers who share the same experience and belief. However, the most powerful evidence that angels exist is found in Scripture.

From beginning to end, the Bible validates the existence of angels.

When we come to Jesus Christ in a personal relationship, He takes full responsibility for us. That means He takes care of us. And one of the ways God cares for us is through the ministry of His angels.

What an amazing and comfort-filled promise – that God sends His angels to encourage, protect and guide us on our life journey! As God’s messengers and our helpers, angels serve and honor Him through their praise and obedience as they carry out His will here on earth. As believers, we can count on the presence and power of angels – every step of the journey.

Lord, I have to admit that I seldom think about angels. But I want to thank You for their presence and work in my life. I praise You for the comfort, encouragement, protection and guidance they bring. I may not be able to see angels, but by faith, I celebrate the truth that angels really do touch my life.

Read the following verses and determine the work of angels in each circumstance.

Genesis 3:24 “After God forced the man out of the garden, he placed angels and a sword of fire that flashed around in every direction on its eastern border. This kept people from getting to the tree of life.”

Revelation 7:11 “All the angels were standing around the throne and the elders and the four living creatures. They all bowed down on their faces before the throne and worshipped God.”

Ask God to bring a new awareness of the ministry of angels in your life.

How precious is God to provide angels as ministers in our lives! As I look back over the past week, I wonder if I missed their presence…when, at the last minute, the car in

swerved to avoid hitting me…or I came across the precious wedding ring I lost weeks ago…or an unexpected phone call of encouragement from a friend I haven’t heard from in years. Coincidence? Accident? I don’t think so! As you go through your day, set your mind on “things above” and be sure to include angels! 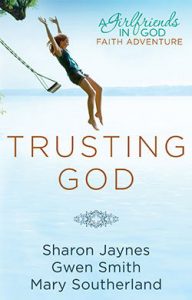 “Just trust me.” Those are the words we hear in movies just before something bad is about to happen. And yet, we are told to trust God. In a culture where we’re taught to take control of our own lives, trusting God has become a religious platitude rather than a life-changing attitude. We say it, but do we really mean it? And what does trusting God really look like? Check out a book by Mary Southerland, Gwen Smith and Sharon Jaynes. Trusting God will help you discover God’s plan for your life. And you just might meet a few angels along the way.

Need prayer? Our prayer team is committed to praying for you. Email your requests to our prayer team director, Ginger Meador, at gjmeador@comcast.net

6 Responses to “Do You Believe in Angels?”