Do I Really Need to Fail?

“And we know that in all things God works for the good of those who love Him, who have been called according to His purpose”

I have never met a single person whose goal in life was to fail, but failure is a reality of life. The key to 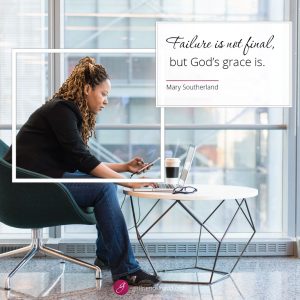 success is not avoiding failure; it is learning how to handle failure.

I remember the first time I failed a test. I was in first grade and my teacher, Mrs. Martin, decided to test us on the names of the states and their capitols. We had been studying them for what seemed like an eternity. I did not like Geography and tended to day dream my way through class. Why did I need to know the names of states I would probably never visit? And what was the big deal about state capitols? As far as I could tell from the pictures in my Geography book, they all looked pretty much the same to me – boring.

Even though I didn’t like Geography, I had to make 100 on the Geography test. Why? I was only six years old, but I knew the unspoken rule that failing a test meant I was a failure.

When Mrs. Martin told us to clear our desks except for one pencil, I panicked. A quick glance at the assignment board revealed nothing. The look of confusion on the faces of my classmates told me that they were just as clueless as I was.

“We are having a little test to see how you are doing in Geography,” Mrs. Martin explained. I had three problems with her statement. First, there is no such thing as a “little” test. Second, no one had said anything about having a test, and third, I did not know the names of the states and their capitols. When I voiced my complaints, Mrs. Martin smiled and said it was a “pop quiz.”

Sidebar: That might have been the moment when I decided to become an elementary school teacher, vowing to never subject my students to the terror of “pop quizzes.”

My stomach dropped and I broke out in a cold sweat. My mind raced as I frantically searched for my Geography book. Maybe I could learn the names of a capitol or two while she handed out the tests. “No books allowed,” Mrs. Martin warned. I was doomed.

When the blank outline of the United States appeared on my desk, I burst into tears. Mrs. Martin asked the student teacher to take over as she gently ushered me out of the classroom and in to the nurse’s office next door.

When I finally stopped crying, Mrs. Martin said, “Honey, what is wrong?” I could not believe my ears. “I don’t know the names of the states or their capitols,” I wailed out what seemed to be a ridiculously obvious explanation. “Do you know some of them?” she asked. I thought for a moment. “I know some of them but not all of them and that means I’ll fail the test,” I responded. “Why don’t you just do your best and see what happens,” she said. I did my best … and I still failed the test.

Guess what? The world kept spinning. I passed first grade and elementary school with flying colors, graduated from high school with honors, attended college on a music and academic scholarship and eventually became an elementary teacher. And I failed a lot along the way. So did a lot of people in the Bible.

Adam and Eve blatantly disobeyed God and then lied about their sin. David committed adultery with Bathsheba and then plotted the murder of her husband. Peter bragged about his commitment to Jesus but denied Him – not once – but three times. In fact, it’s hard to find Biblical characters who didn’t fail at some point, but those who learned from their failure and used it as a tool of growth were often used by God to accomplish great things.

I have come to believe that failure is a necessary part of our growth and maturity as a follower of Jesus Christ. Failure can interpret the unconditional love and forgiveness of God like nothing else can – if we trust God enough to transform tragedy into triumph. Desperation can be our friend if it makes us crave God and long to see His power unleashed in our lives. Failure is not final, but God’s grace is.

Father, I know that I have failed You. Forgive me for the sin in my life. Thank You for Your love and mercy that covers that sin. Help me learn the lesson that each failure holds. Teach me to trust You with my whole life – failures and all.

Read Romans 8:28. “And we know that in all things God works for the good of those who love Him, who have been called according to His purpose” (NIV). How does this verse apply to the way we view and respond to failure? 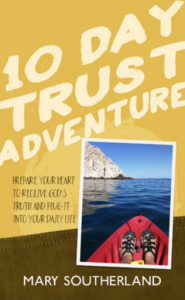 What does it mean to trust God? What would your life look like if you were walking by faith and trusting God with your whole heart? The 10-Day Trust Adventure addresses every decision you make in every area of your life – including your past and future, your family and friendships, your finances and work – and how to make those decisions as you step out in faith and really trust God.

Be sure to drop by the page on Mary’s website with FREE MP3s. And be sure to connect with Mary on Facebook or through email. And if you would like to receive more devotions like this one, sign up for Mary’s Blog.

5 Responses to “Do I Really Need to Fail?”