And don’t grumble as some of them did, and then were destroyed by the angel of death. These things happened to them as examples for us. They were written down to warn us who live at the end of the age.

Recently my teenage daughter asked me for something new. I told her we wouldn’t be purchasing it, and she 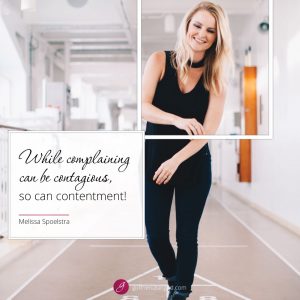 needed to be content with what she had. Her response was, “I am content… but I just want more.” I laughed with her and told her she needed to revisit the definition of contentment.

Complaining is a universal problem, especially among women. We don’t like our body type, the texture of our hair, the faults of our husbands, our budget, or the habits of our mothers-in-law. We always seem to want more.

Complaining may seem like a small vice when compared to lying, adultery, or murder, but God says grumbling against Him is a serious issue. Consider the Israelites in Numbers 11:1. “And the people complained in the hearing of the Lord about their misfortunes, and when the Lord heard it, his anger was kindled, and the fire of the Lord burned among them and consumed some outlying parts of the camp.”

Based on the Lord’s reaction, it seems that complaining is a big deal to Him! The New Testament referenced the Numbers account of the Israelites in the wilderness with the apostle Paul reminding the Corinthian church and us that these things were written down as a warning.

God had delivered His people out of Egypt and was guiding them into the promised land. But it seemed like they were saying, “God I know you got us out of slavery, but we are not content with your provision. We don’t like the food or the length of time it is taking to get us where we are going.” As the foreigners among the Israelites began to crave the good things of Egypt, the Israelites themselves seemed to catch the complaining bug. The foreigners planted seeds of discontent which gave unspoken permission to those around to vocalize the sin simmering under the surface.

I have found in my own life that sin is contagious. When I complain, I hear my kids complain. When I get angry, it can flare the tempers of those around me. When I gossip, others join in. How about you? When others are standing around the water cooler complaining about the boss, is it easier to point out your own irritations? When another woman shares her frustrations about her husband does it open the door for you to vent as well?

We can set the tone in our homes, workplace, communities, and church gatherings. While complaining can be contagious, so can contentment! When we appreciate God’s provision rather than always long for something more or different, others will be impacted. Now the last thing we want to do is put on a mask and walk around pretending everything is fine when it is not. That is not the definition of contentment. Contentment does not mean an absence of authenticity. In order to accept difficult circumstances, we must be honest about our problems but then turn to God for help. That’s just what Moses did with his grumblings. The contagious complaining from the Israelites was like a snowball headed right his direction.

Instead of giving in to the contagious complaining, Moses took His frustrations straight to the Lord. The key is to bring our problems directly to the Lord and then listen for His comfort and direction. God didn’t shame Moses for having feelings. Instead, He gave him some solution- oriented steps to take.

God also says He will answer us when we call on Him. God will provide for us–physically and emotionally. When we feel tempted to keep rolling with the complaining around us, we can look for ways to express gratitude and start some contagious contentment instead!

Pay close attention to your complaining habits this week. Every time you complain, think of one related blessing and speak it out. For example, if I complained about the amount of laundry I need to do – I could be grateful my family has so many clothes to wear.

Want to study more about learning contentment in a culture of more?  Sign up for a free 7-day contentment project at http://melissaspoelstra.com/contentment-project/

Friend to Friend
I am such a mess. I hate how I am. I can’t ever get a handle on this issue.

Let’s Pray
Father, help me to receive your grace, love, and help.
In Jesus’ Name.
Amen.

Now It’s Your Turn
Admit an area where you need God’s help to change. Ask Him to show up there. Look for Him throughout your day.

More from the Girlfriends
Kelly Balarie, blogger at Purposeful Faith and author of the new book “Battle Ready: Train Your Mind to Conquer Challenges, Defeat Doubt and Live Victoriously” is passionate about joining hands with women who often find themselves stuck in the pits of life. Step-by-step, word-by-word, her dream is that together they can emerge better - fear, fret and panic-free. Get all of Kelly’s Purposeful Faith blog posts by email for a dose of inspiration and encouragement.
girlfriendsingod.com/devotions/ ...